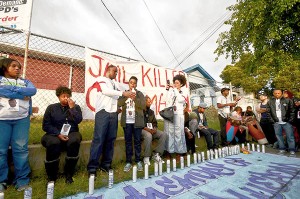 Oakland, Calif. — More than 150 people came out to honor the memory of young Alan Blueford on May 5, the one-year anniversary of his killing by Officer Miguel Masso of the Oakland Police Department. Masso, who also shot himself in the foot, has yet to be fired, tried or held responsible in any way for Blueford’s death. Family, friends and supporters came together to honor the slain young man, determined to pursue justice for his death at the hands of the OPD.

Led by the family, the crowd marched from Sunnyside Park in East Oakland to the site where Blueford was killed, the 9200 block of Birch Street. Chalkuppy had rendered a beautiful chalk drawing on the sidewalk. Haitian drummers played a traditional beat as the crowd neared. Vigillers carried candles, and a beautiful flock of doves was released in Blueford’s honor. Rest in power, Alan, was the theme.

The week of May 6 OPD’s leadership was exposed for not being willing or able to investigate their own. Chief Howard Jordan resigned suddenly on May 8. He was replaced by a deputy chief for two days and then replaced again. The federal court-appointed compliance director, Thomas Frazier, has decided to take the unprecedented step of reinvestigating several police misconduct cases. The Justice for Alan Blueford Coalition plans a press conference to address these ­developments.