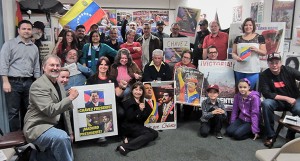 On May 5, a meeting called by the Boston Bolivarians celebrated the legitimate victory of the first working-class and Chavista president of Venezuela, Nicolás Maduro Moro. The well-attended event was held in the office of the International Action Center, together with Team Solidarity, a group to which several members of the United School Bus Workers belong. Steve Kirschbaum, a leader of Team Solidarity, along with his co-workers expressed their total endorsement and appreciation of and support for new Venezuelan president Maduro.

The day was exactly two months after the physical death of Venezuelan President Hugo Chávez. The people in attendance, along with the organizers, paid tribute with applause at 4: 55 p.m. Boston time (4:25 p.m. Venezuela time) to celebrate the life of the man who changed the course of history in Latin America and other places around the world.

One of the organizers, Rena Yllas, stated, “These months have been very hard for those of us who support the Bolivarian process because our mourning and need to continue the revolution are mixed with feelings of great happiness with the triumph of Maduro and great pain from the loss of the towering figure and undisputed leader Hugo Chávez.”

In addition to celebrating the victory of President Maduro and honoring Chávez, poems were recited and recent developments were analyzed, including the elections of April 14 and the days immediately following. Of outstanding importance for the continuity of the Bolivarian Revolution and the upcoming challenges were, among others, the violence and aggression from opponents of the government (12 people have died to date) and the continuation of coup attempts with attacks against such institutions as the CNE, the electoral authority, and the TSJ, the highest judicial organization. Also discussed were economic similarities with Chile in 1973 and with Chávez in the 2002 attempted coup, incidents of sabotage and constant challenges to the stability of the country.

The approximately 40 people at the event also focused on the achievements of the revolutionary process, among which were the undeniable strength of the organized people, the historical growth of Chavismo in the face of difficulties, the efforts of the government and its strategy of “work and more work” with the “government in the streets” initiated by Maduro. During his two first weeks as president, Maduro has already visited three states in the country, accompanied by his entire cabinet. Also analyzed were the nonviolent nature of the revolution itself and the clear calls for peace the government is making to the people to avoid responding to provocations by the opposition.

In light of May Day, International Workers’ Day, participants stressed the gains made by the workers in Venezuela during the last 14 years, including shortening of the work day, continuous wage increases, the renewed appreciation of the value of work in the home, and other gains made by the working class and women.

The group Boston Bolivarians is continuing its agenda of activities and calls upon its friends and the general community not to be deceived by distortions about the true nature of the Bolivarian process. It asks everyone to spread the word about the gains of the revolution, which are the same as those yearned for by the majority of the world’s people — which nowadays can be felt as a reality in Venezuela.

The group Boston Bolivarians can be contacted and followed on twitter at @bbolivarians, by telephone at 617-819-HUGO (4846) or via email at [email protected]