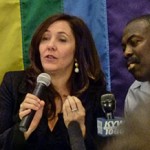 Mariela Castro Espín, the director of the Cuban National Center for Sex Education (CENESEX) in Havana, Cuba, and a deputy of Cuba’s parliament, the National Assembly of People’s Power, spoke at the Equality Forum in Philadelphia on May 3.

Castro Espín has spearheaded a number of campaigns over the last decade to promote acceptance of LGBT Cubans and to curb the spread of HIV/AIDS on the island. She successfully lobbied the Cuban government to begin offering free sex-reassignment surgery under the country’s national health care system in 2010. Observers have credited Cuba’s condom distribution campaign and sexual education curriculum with producing one of the world’s lowest HIV infection rates. Cubans with the virus also have access to free anti-retroviral drugs through the country’s health care system.

Sarah Stephens of the Center for Democracy in the Americas; Wilfredo Labiosa of the group, Acceso; and Philadelphia resident Ada Bella, who emigrated from Cuba to the United States in 1958 were the other panelists, all of whom praised Cuba’s LGBT policies.

In response to a question about the legacy of “machismo” there, Castro Espín said there are some people in Cuba opposed to gay marriage, but that changing their minds is a process, done through discussion. “We want everybody to have the same rights,” she said, speaking about the leadership of the revolution’s long history of fighting against racism and for women’s equality, “I think that same-sex couples should have the same rights.”

There was no hostility toward the Cuban revolution expressed from the six audience members who asked questions. Castro Espín later received the International Ally for LGBT Equality Award.

A video of Mariela Castro Espín’s talk in New York City is at www.youtube.com/watch?v=lPyBdQHqOgc.