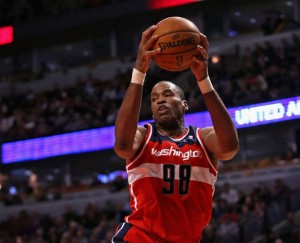 When the great African-American baseball player, Jackie Robinson, broke the color barrier of the then all-white, segregated Major Baseball League on April 15, 1947, as a Brooklyn Dodger, it was a historic first. It was even more remarkable because there wasn’t a modern-day Civil Rights Movement at that time to support his efforts. In fact, it would take another seven years before the historic Montgomery Bus Boycott was launched to challenge Jim Crow racism in Alabama and throughout the South.

Similar to the Black masses, Robinson endured unimaginable racism from baseball fans, opposing players and even some of his own teammates.

In 1962, Robinson became the first Black player to be inducted into the MLB Hall of Fame. In 1997, on the 50th anniversary of his entering the MLB, Robinson’s number, 42, was retired league-wide. It was an unprecedented honor for any U.S. professional athlete.

This announcement by the seven-foot-tall, 12-year NBA veteran resonated not only within the NBA and other sports but also throughout U.S. society. Collins received massive support that transcends the sports world.

Gay, lesbian, bisexual, transgender and queer athletes, regardless of nationality, gender, age, or amateur or pro status, play all kinds of sports. Some active athletes who play in individual sports, like tennis, have come out, especially female players. But this is not true of LGBTQ athletes in team sports, especially those deemed to be “masculine” driven.

Some of these athletes have come out publicly once they have retired from age or injury, like football running back David Kopay in 1975. Many, understandably so, fear verbal, emotional and physical abuse from teammates, fans and society as a whole — a society impacted by homophobic attitudes perpetuated by the ruling 1%.

However, it is important to put into broad perspective the current social period in which Collins told his exclusive story in the May 6 issue of Sports Illustrated. Collins’ announcement comes 44 years after the historic 1969 Stonewall Rebellion in New York City, which ushered in the modern-day, LGBTQ movement. Gay Pride marches, which started in 1970, bring out hundreds of thousands in many U.S. cities, especially during the month of June.

Despite political ebbs and flows over the decades, this mass movement continues to be in the forefront of battling anti-LGBTQ oppression on all fronts. Due to the strength of this movement, same-sex marriage, an economic civil right, has been legalized in 11 states and counting. Even President Barack Obama mentioned LGBTQ rights in his second inaugural speech this past January.

Straight athletes, such as football players Brendon Ayanbadejo and Chris Kluwe and baseball player Brandon McCarthy, have strongly expressed their support for LGBTQ rights. In a related article in the May 6 SI issue, Ayanbadejo mentioned that he anticipates that some active, gay NFL athletes will be making a public announcement similar to Collins’ before the end of the year. The NHL announced its alliance with the “You Can Play Project,” an organization which opposes anti-LGBTQ discrimination in sports.

Collins certainly didn’t make this life-changing decision within a social vacuum. For instance, he has worn the number 98 as a player, in memory of Matthew Shepard, a gay youth kidnapped, tortured and murdered in Wyoming in 1998 by homophobic bigots. This atrocity provoked many angry protests throughout the U.S. Upon hearing that Collins paid tribute to her son, Judy Shepard reportedly cried.

It is understandable why many are making comparisons between Robinson and Collins. Both are African-American. Both made difficult decisions to help tear down the barriers of injustice during two different social epochs. Robinson’s actions were a precursor to the Civil Rights era, while Collins’ announcement was influenced by progressive changing societal attitudes toward LGBTQ people. Collins states in the SI article, “I’m Black and I’m gay. I didn’t set out to be the first openly gay athlete playing in a major American team sport. But since I am, I’m happy to start the conversation.”

Collins is currently a free agent after being released by the Washington Wizards at the end of the regular season. It remains to be seen if he will be signed before the 2013-2014 NBA season by what would be his seventh team. Hopefully, he will play again.

Jason Collins’ words will help inspire LGBTQ youth to seek alternatives other than suicide as the only relief from the relentless torment they may face in school or on the playground.

Upon Collins telling his twin brother that he is gay, Jarron Collins stated, “I’ll love him and I’ll support him and, if necessary, I’ll protect him. … Today, Jason has taken a huge weight off his shoulders. And I’ve never been more proud of him.”

Jarron Collins speaks for millions of us. Jason Collins’ heroism will encourage more LGBTQ people, athletic and non-athletic, to express publicly that they have the right to be proud of their sexual identities and preferences — because they will know that an even more determined mass movement will have their back. n