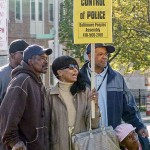 A recent report from the Malcolm X Grassroots Movement concludes that Black people in the U.S. face a crisis in their constitutional and human rights.

The report documented an epidemic of unjustified police killings. In 2012 alone, more than 312 Black people were killed by police and vigilantes at a rate of one person every 28 hours. (mxgm.org, April 21)

The victims were young, old, men, women and children. They were unarmed; many had actually called on the police for help.

On May 11, people will gather at the site in Baltimore where, in front of his children and family, Anthony Anderson Sr. was so brutalized that he died of his injuries. Nothing was done to the officers responsible.

The marchers will begin a three-day march of 41 miles to Washington, D.C., in commemoration of the 1968 Poor People’s Campaign organized by the Rev. Dr. Martin Luther King Jr., himself a victim of police and FBI abuse.

King saw the Poor People’s Campaign as a new phase in the Civil Rights movement encompassing the larger arenas of human rights and anti-war activism. Before he could complete his plans, he was gunned down in Memphis, Tenn., while supporting a strike of Black sanitation workers.

Since January 2012, 18 people have been killed by the Baltimore Police Department, and not a single officer has been indicted. The story is much the same across the U.S.

The mainstream media have a lot to say about so-called international terrorism, but almost nothing about the terrorism going on daily against Black, Latino/a and poor communities.

Boston, a city of more than 1 million people, was occupied in April for one week, including a 24-hour lockdown, as police agencies tried to locate two men who had allegedly killed four people. During the same length of time in 2012, according to MXGM, six Black people were killed by police and vigilantes.

The police and their friends in the U.S. (in)justice system carry out these acts not just because they are brutal, savage, racist individuals, although many of them are. Soldiers from the U.S. and other imperialist countries, who invade and occupy countries such as Afghanistan, Iraq and Palestine, commit many of the same acts of violence.

Although the occupiers are portrayed as “peacekeepers” or “promoting democracy,” nothing could be further from the truth.

In the U.S., poor and working people, particularly communities of color, find themselves in the same predicament, except here the occupiers are the police, backed by the courts and prisons and aided by racist vigilantes.

Although the cops portray themselves as “neutral” keepers of public order, their real role is to ensure that nothing challenges the absolute supremacy of the big corporations and their paid politicians.

That is why the Poor People’s Campaign demands community control of the police and an end to mass incarceration.

The 2013 Poor People’s Campaign, like the one started by King, wants to expand the scope of resistance to include struggles against the many ways the super-rich and their lackeys try to keep poor and working people down.

Behind the police repression is deepening poverty. Dr. King called for jobs or income for everyone.

One out of four people in Baltimore lives below the poverty line. A new program of austerity is intent on slashing vital social services, even Social Security, Medicare and Medicaid. These cuts are made as the wealthy receive ever-increasing tax breaks and the banks reap the benefits of trillions of dollars in government bailouts.

Dr. King was killed while leading a struggle for workers’ rights. Today these rights are under attack for both organized and unorganized workers. From Walmart to McDonald’s, we must defend workers’ rights to decent pay and working conditions.

Racism and hatred in all its forms — attacks on immigrants, women, and lesbian, gay, bisexual, transgender and queer people — must be constantly fought. We can no longer be divided from or consider a person “illegal” simply because he or she has crossed a border. The fight for justice con­tinues when women are denied equal rights and LGBTQ people suffer from violence and bigotry.

Dr. King accurately proclaimed that “every bomb that falls on Vietnam is a bomb dropped on our inner cities.” The growing trillions spent on the Pentagon could instead fund health care for every uninsured person and provide education and jobs for all.

Meanwhile, the refusal to deal with ever-growing evidence of climate change threatens the entire planet.

The only way to build Dr. King’s beloved community is to end war and repression and put people’s needs before profits.