Workers World Editor Deirdre Griswold spoke with women in three cities who will be participating in the Poor People’s March from Baltimore to Washington, D.C., on May 11-13. Here’s why
they’re taking part in this important activity. 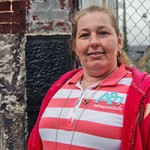 Barbara Kauffman, Baltimore: “We hope to make change so we can better things for everyone. All type of things are going on that should not be happening, but they are. This march covers a lot of things, not just one area. The rich man gets richer, the poor man gets poorer. We want equality.”

Kay Adler, Baltimore: “I’m a volunteer with the Baltimore All Peoples Congress, also a member of the Southern Poverty Law Center in Birmingham, Ala., and a member of B.R.A.I.V. — Black/Red/American Indian Voices.This march is extremely important, especially because we’re marching in the spirit of Dr. Martin Luther King. We’re marching from Baltimore to D.C. to accomplish reviving Dr. King’s dream and vision. We are marching for the rights of all people, because if there is no justice, there cannot be any peace.” 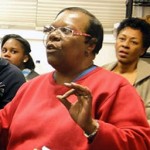 Georgia Scott, Boston school bus driver: “Local 8751 [Steelworkers Union] has always participated in these kinds of activities. We believe strongly in the people’s rights — the poor people, the working people, they’re the ones who make the cities run. I’m from Selma, Ala. There’s been a lot of segregation down there, so I’ve always had a passion for this type of fight. I think we need some changes. I’m hoping that we’ll get some kind of respect, because right now they’re trying to resegregate the schools in Boston. There’s a handful of people who dictate how we live, and they try to pit us against one another.” 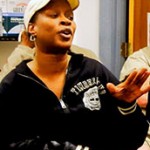 Nichole Gatling, Brockton, Mass., school bus driver, Teamsters Local 653 steward: “I believe in solidarity. I’m one of the founders of Team Solidarity in the Boston area. I believe in the original campaign for the Poor People’s March. I’ll be going to show solidarity with other union members and with Baltimore, where there’s police brutality and workers under attack. Just being able to take care of your family, have affordable health care; we need economic justice for every human being, to be treated fairly for what you produce. We school bus drivers don’t have affordable health care; we get paid by the minute, not even the hour. I’m a mother and need flexible hours; that’s why I’m a bus driver.”

Zaina Alsous, Raleigh, University of North Carolina student: “I’m drawn to this march personally in this year of commemoration of the 45th anniversary of Dr. King being assassinated in his struggle for worker justice. As young people, it’s very important to engage in these moments of powerful mass demonstrations to help carry on the rich organizing legacies that we’ve inherited. Baltimore is a key battleground, especially in the Black struggle, what with the extent of police brutality and repression there. As a student I can definitely see the interconnection between the class and racial struggles going on now around the country. Austerity is falling on the backs of students, youth, and poor and working people, especially people of color.”