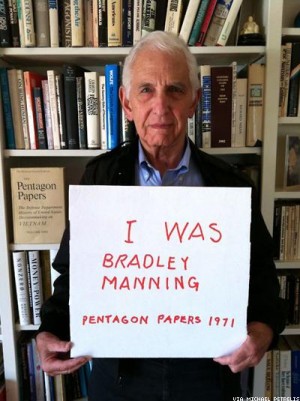 Carrying signs that read “I am Bradley Manning,” some 200 lesbian, gay, bisexual, transgender, queer and allied activists protested at the offices of the San Francisco Pride Board on April 29 in light of the board’s refusal to accept the selection of Pvt. B. Manning as a grand marshal of the 2013 San Francisco Pride parade. Manning, who in February proudly admitted to releasing documents to WikiLeaks that exposed the U.S. military’s war crimes in Iraq and Afghanistan, is hailed by many as an anti-war hero and a representative of the continuing legacy of LGBTQ+ activism. Manning remains imprisoned, awaiting a court decision on the case.

Manning was nominated as a grand marshal by a member of the San Francisco LGBT Pride Celebration Committee, which is composed of former grand marshals, and voted in by the committee’s members. However, just hours after the Bay Area Reporter announced Manning’s selection, the president of the Pride Board, Lisa L. Williams, released an incendiary statement saying that the announcement of Manning’s selection had been “a mistake” made by a lone staff person who had been consequently “disciplined.” Williams further declared that “even the hint” of support for Manning at this year’s parade “would not be tolerated.”

LGBTQ+ activists are outraged by Williams’ suggestion, in the statement, that Manning’s actions “placed in harms way the lives of our men and women in uniform” — language that closely mirrors the rhetoric of imperialist politicians and prosecutors in Manning’s case, and ignores the fact that Manning courageously released the WikiLeaks documents in an effort to prevent the continued losses of life to illegal wars. They also condemn the San Francisco Pride Board’s hypocritical embrace of anti-worker, pro-war corporate sponsors that wreak havoc on the lives of both LGBTQ+ and non-LGBTQ+ people on a daily basis.

Speakers at the rally included whistleblower Daniel Ellsberg, who prior to the board’s decision had agreed to stand in for Manning at the Pride parade. In 1971, Ellsberg leaked the Pentagon Papers, which exposed the Lyndon Johnson administration’s lies about an alleged North Vietnamese attack on U.S. destroyers in the Tonkin Gulf in August 1964. These lies helped the White House and Congress justify the Pentagon’s escalation of the Vietnam War.  The release of the Pentagon Papers in turn accelerated the anti-war movement that, along with the Vietnamese National Liberation Front’s military defeat of the U.S., helped force the war’s end.

Ellsberg now plans to march in the parade on June 30 with a banner declaring solidarity with Manning.

The author is a queer activist.