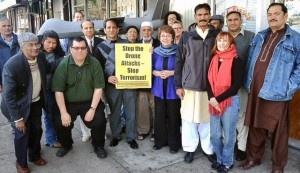 On April 14, the Pakistan USA Freedom Forum organized a meeting in the heart of Brooklyn, N.Y.’s Pakistani community at the Pakiza Restaurant on Coney Island Avenue to oppose expanding U.S. drone wars and to call for the full legalization of all immigrants.

In this photo, some participants and speakers are posed in front of a large drone replica displayed in front of the restaurant on a crowded street.

The meeting was a full house as speakers denounced U.S. drone attacks, called for the repatriation of U.S. political prisoner, Dr. Aafia Siddiqui, to Pakistan and urged support for the May 1 Rally for immigrant rights.

Many of the sponsoring groups were also supporting an anti-war and anti-drone demonstration the following day that gathered at 8th Avenue and 15th Street in Manhattan at 12 noon.