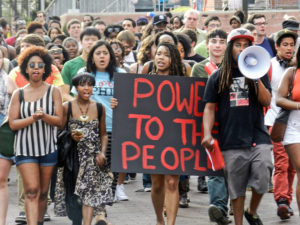 Philadelphia — For the second time in less than two weeks, African-American professors and students at Temple University staged demonstrations on April 10 to protest racist attacks on the school’s Department of African-American Studies. The hundreds who turned out were joined by activists from the community. A march through the campus followed the rally.

As the nationally renowned program — the first to offer a doctorate in the discipline — nears its 25th anniversary, Teresa Soufas, dean of Temple’s College of Liberal Arts, has placed the department in receivership and appointed a white vice dean as interim chair.

When Nathaniel Norment, the department’s previous chair, retired in 2012, Soufas gave the faculty two weeks to elect a successor. Although they selected a respected African-American professor, Dr. Kariamu Welsh from Temple’s Boyer College of Music and Dance, Soufas, who hails from the South, rejected their choice.

Refusing to explain her decision, Soufas instead appointed Jayne Drake, vice dean for academic affairs, as acting director. Drake, also from the South, is a scholar on 17th to 19th century American literature with no background in African-American studies.

Temple University is situated in the heart of one of Philadelphia’s African-American communities that has long been targeted for gentrification. Area residents have already been organizing to protest the exclusion of Black and Latino/a workers from the numerous construction projects that dot the campus. A number of residents were on hand to speak out against the attack on Black Studies.

One of the arguments Soufas has attempted to use to justify Drake’s appointment was that the university would benefit from this “diversity.” At the April 10 rally, Kashara White read from a letter addressed to Soufas by undergraduate students: “Why is it that the issue of diversity always falls on Black Studies? If you are so concerned about ‘diversity,’ why don’t you teach communism and socialism alongside capitalism in this university?” White concluded, “We are prepared to take action and we won’t stop until we get what we rightfully deserve.”

Speaking at the rally, Pam Africa with the MOVE organization told the students that “Soufas does not stand by herself — she’s got backup. How arrogant can she be to put a white woman in charge of African- American studies? She doesn’t understand the fight it took to make sure this department is even here. Soufas has got to go!” n