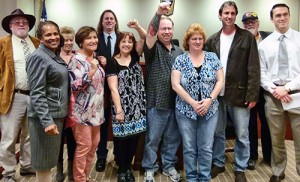 The members of the American Postal Workers Union, the National Mail Handlers Union, and the National Association of Letter Carriers in the audience knew the announcement was only a temporary decision. Also, six-day delivery was just one of the many issues they had come to talk about at the hearing.

The Board of Governors of the USPS “will follow the law and has directed the Postal Service to delay implementation of its new delivery schedule,” stated the press release.  The board also announced plans to request rate increases for certain products and to reopen negotiations with the four postal unions, even though contracts were just recently signed. (about.usps.com, April 10)

National Association of Letter Carriers president, Fredric Rolando, later responded: “Asking the NALC to renegotiate a contract that was just settled in January is insulting and unnecessary.” He instead called for the reduction or elimination of the crushing $5.5 billion pre-funding burden that has caused more than 90 percent of this year’s financial loss so far. (nalc.org, April 10)

Postal workers are convinced that the USPS, fearing more resistance in the future, is speeding up other drastic measures that will significantly delay mail and permanently damage the nation’s mail system.

Since 2012, the USPS has closed 114 mail processing plants, one third of the country’s mail processing capacity. Reneging on its commitment to lawmakers and communities, the agency announced last month that it was accelerating plans to close even more mail processing facilities. The USPS said it will consolidate 55 plants this year that were originally scheduled for “possible” closure in 2014.

A Postal Service study indicated that revenue lost from consolidations could be as high as $5.2 billion. In addition, the Postal Service has reduced hours at approximately 6,500 post offices and plans to cut hours at 6,500 more.

The APWU Local 3722 president, Debbie Szeredy, traveled to the hearing from Newburgh, N.Y., to file a formal complaint with the PRC.  She argued that the  consolidation of 55 facilities should not be allowed to proceed. These include her own Mid-Hudson processing and distribution plant, previously scheduled for closure in 2014 but now moved up to 2013.  Her local also contacted union officials at 35 of the 55 endangered plants, encouraging them to file their own complaints.

Szeredy’s complaint pointed out that decisions are being made based on area mail processing studies that are up to five years old.  Much has changed in those years, including higher productivity and lower labor costs.

In addition, the Postal Service has refused to provide unredacted copies of the completed AMP feasibility studies, and failed to consider the effects of plant closings on area small businesses. Communities potentially affected have not been provided with adequate public notice of the new accelerated plan, announced just a few weeks ago.

The complaint argues that because of these failures, the Postal Service should hold a new meeting about the Mid-Hudson plant, provide a new cost-savings analysis based on updated data and share unredacted reports with the union.  Until these things are done, the PRC should stop any further plant consolidations.

Postal workers in the room did applaud after Szeredy’s statement, as well as for other testimony that supported the future of the Postal Service.

This writer also spoke. He described how the PRC’s decisions impact our communities, which are still suffering from the capitalist crash of 2007.  Congressional sequestration and austerity compounds that continuing crisis.  So too does the push by financial institutions and multinational corporations to dismantle and privatize the postal system, eliminating hundreds of thousands of jobs.

Post office closings and slashed services especially affect seniors, the disabled, the incarcerated, immigrants, rural communities, people without permanent housing and communities of color.  Every job eliminated is less money spent in these neighborhoods. Postal workers cannot defeat such powerful forces without the help of the communities they serve.

This year marks the 45th anniversary of Martin Luther King Jr.’s  Poor People’s Campaign, which is being commemorated with a march from Baltimore to Washington, D.C., on May 11 and 12.  Postal workers are being encouraged by Community-Labor United for Postal Jobs & Services to join the event because the struggle to save the post office is part of the fight against poverty.

It will be an opportunity to applaud the unity of our struggles.

Joseph Piette retired from the USPS in 2011.