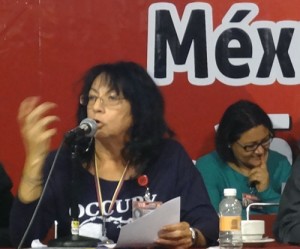 WW’s Berta Joubert-Ceci, right, makes her contribution to
the Seminar on Parties and the New Society in Mexico City.

Mexico City — The recent death of Venezuelan President Hugo Chávez Frias became a central focus for the hundreds of progressives and revolutionaries from all over Latin America, about half from Mexico, and from every continent who gathered in Mexico City in mid-March for the 17th annual Seminar on “Parties and the New Society.”

The Workers Party of Mexico (PT), which has representatives in the Mexican Parliament, hosted the seminar, as it has for the past 17 years. The participants represented a broad spectrum of political tendencies, ranging from revolutionary communist to reformist, but all opposed the neoliberal policies imposed by the imperialists and especially U.S. domination of South America and the Caribbean.

Representatives of Cuba, Venezuela, Vietnam and the Democratic People’s Republic of Korea received an especially warm reception from the participants. The PT president, Prof. Dip. Alberto Anaya, expressed solidarity with all those combatting imperialist domination, from elected Latin American officials to the DPRK, and said he felt Mexicans were under no threat from the DPRK’s nuclear weapons.

International Secretaries Rodrigo Cabezas (left) of the PSUV and Carolus Wimmer of the PCV support Nicolas Maduro for next Venezuelan president; with WW’s John Catalinotto (center).

Speakers at the gathering presented a summary of the papers they published for the event — most limited to 10 minutes but with a few major presentations. Papers covered the world economic crisis, the progressive response to imperialist domination in many Latin American and Caribbean countries, and new experiences in organizing. There was also a remarkable contribution from Indigenous organizations and a greater presence of women than at past seminars.

It was a sign of the enormous influence of Chávez that nearly every speaker opened his or her talks by acknowledging his contributions to the people’s struggles in Latin America and the world, with a greeting of condolence for the Venezuelan delegates and a solidarity salute to the continuing Bolivarian revolution.

The seminar ended with a special meeting featuring Rodrigo Cabeza, international secretary of Chávez’s United Socialist Party of Venezuela (PSUV), who expressed confidence in the Venezuelan people’s determination to continue the revolution that Chávez was leading.

All the left and revolutionary political parties in Venezuela — including the Communist Party (PCV), the Nation for All (PPT) and others — are supporting the election of the PSUV candidate and acting President Nicolas Maduro for president in the April 14 elections.

One of many examples of contributions to the women’s struggle was that of Blanca Flor Bonilla from the Farabundo Marti National Liberation Front of El Salvador, who gave an historical overview of the participation of women in the struggles there in the early 1900s.

There were also participants from Canada and the United States. The only U.S. political tendency was Workers World Party, represented by WW editorial staff members Berta Joubert-Ceci and John Catalinotto. Both made contributions to the discussion.

Joubert-Ceci, who is Puerto Rican, while honoring the great contribution of women activists to the organizational success of the seminar, painted a vivid picture of the difficult situation for all workers in the U.S. and especially for women and workers of color. She appealed for international solidarity from the other delegations, with an effort to coordinate international actions by the working class.

Catalinotto presented a synopsis of the points Fred Goldstein makes in his book, “Capitalism at a Dead End,” which argues the impossibility of a normal recovery cycle for capitalism. Because of this impossibility, workers’ parties — despite present ideological and political differences — need to prepare over the long term for a revolutionary struggle for power.