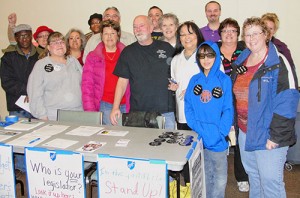 Wichita, Kan. — At a legislative listening session on March 23 in Wichita, Kan., dozens of members from a rainbow of labor-community organizations grilled and confronted legislators on a variety of topics for two hours. The more than 40 speakers at Wichita State University’s Metroplex building made demands including the legalization of medical marijuana, the expansion and full funding of Medicaid, legalization for immigrants, complete reproductive freedom for women, an end to attacks on unions, an end to public school closings and charter schools, and many other people’s concerns.

The rousing session included many rounds of loud applause and chants of approval for the people’s speakers, despite various legislators — some of whom are American Legislative Exchange Council members — saying that these responses were not allowed. Some of the biggest approval from the audience of more than 250 was for women speakers demanding, “End the war on women.”

Before the forum began, members of the musical band, Shoulder-to-Shoulder, welcomed forum participants at the outside entrance with people’s songs such as “We Shall Not Be Moved” and Woody Guthrie’s “This Land Is Your Land.” The band played on despite a bitterly cold day, a snowstorm and security police attempting to move them to a “free speech zone” on the other side of the building.

The March 23 forum was preceded by a similar legislative forum on March 2 in Wichita. More than 300 teachers from the United Teachers of Wichita and other labor-community members packed that event with a standing-room-only crowd.