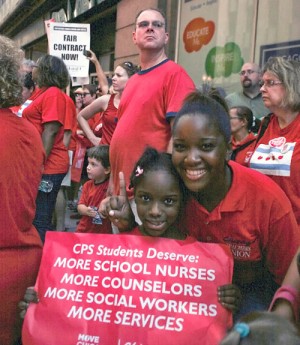 Chicago — The Rahm Emanuel administration and the Chicago Public Schools, along with politically connected corporate interests, are making a calculated move to turn the clock back for Black and Latino/a students to the bad old days of Jim Crow apartheid “separate but equal” schools.

The administration is trying to convince Chicago residents that a reckless campaign of privatization and mass shutdown of CPS schools will somehow help students and parents combat the alleged problem of “underutilization” and help schools perform better.

But this is really a direct attack on the Black and Latino/a communities and Black teachers. Karen Lewis, the popular leader of the Chicago Teachers Union, led a strike in September of last year against this racist corporate agenda. The strike attracted truly mass support across the United States.

The teachers bravely fought against the plan to close large numbers of schools in the city’s most oppressed neighborhoods, part of an agenda to move toward an apartheid system of anti-union, privatized charter schools. This two-tiered system allows rich, white northsiders to send their kids to lavish private schools.

Meanwhile, Black and Latino/a families would have to send their children to underperforming charters that steal tax dollars to line the pockets of corporations behind the push for privatization.

The corporate-controlled media in Chicago are pushing a set of lies designed to advance the privatization agenda. They claim that CPS schools are underperforming academically and/or are being underutilized and should either be shut down or consolidated.

Initially last year, the pro-rich Emanuel administration had nearly 120 schools on the chopping block. Now, in what would be the largest public school closing in U.S. history, Chicago officials are proposing to shutter 61 schools, or 9 percent of the 681 schools citywide.

Much has been made in the corporate-controlled, capitalist media about this so-called “underutilization crisis” and alleged excess capacity as an excuse for Emanuel and CPS to close schools. The fact is that this is due to the reckless campaign the administration has pursued in opening new private charters, coupled with the consolidation of existing schools and the construction of over 100 new schools.

CPS is trying to make people believe that the system now has excess capacity for 200,000 students. However, in 2011, they claimed that number was 80,000. They’re manipulating the numbers to serve the apartheid privatization agenda Emanuel is pushing. Their calculations are based on questionable assumptions about high class sizes and insufficient space for nonclass usage and extracurricular activities.

The utilization rate can show a night-and-day difference if you tinker slightly with these assumptions. The CPS can tailor the numbers to fit corporate needs. The result is that perfectly viable schools in Black and Latino/a neighborhoods would be handed over to politically connected, anti-union, private operators who would be totally unaccountable to parents in the communities they would allegedly serve.

Karen Lewis says: “Closing 50 of our neighborhood schools is outrageous, and no society that claims to care anything about its children can sit back and allow this to happen to them. There is no way people of conscience will stand by and allow these people to shut down nearly a third of our school district without putting up a fight. Most of these campuses are in the Black community. Since 2001, 88 percent of students impacted by CPS School Actions are African-American. And this is by design.” (ctunet.com, March 21)

Despite all the Emanuel administration propaganda to the contrary, anti-union, privatized charter schools underperform. CPS’ own accountability data show that the apartheid charters performed in the 33rd percentile in elementary school reading test scores. Neighborhood public schools scored in the 43rd percentile. That 10 point difference is despite the fact that public schools don’t require entrance exams.

In parallel to the move against the schools is a war on Black teachers. In 1995, 45 percent of CPS teachers were Black. After 13 years of ethnic cleansing by the Daley dictatorship and Emanuel administration, this number is only 25 percent.

Though it claims to lack funds, the administration is wasting hundreds of thousands of dollars on this reckless, racist privatization campaign. It costs the school district more than $11,000 for every additional charter student, plus more than $500,000 in start-up costs for every charter school opened in 2012. These costs have vacuumed up all the much-vaunted “savings” of closing viable neighborhood public schools.

Parents have no idea where this generous allotment of their tax dollars is going, because it is being swallowed up by private corporations that are not held to the same standards of transparency and accountability that neighborhood public schools are.

A March 21 Washington Post article reported: “Research suggests that school closings may hinder, and rarely help, students’ academic progress, even when so-called failing schools are closed, and cost savings are often not as great as expected. In fact, when [Washington, D.C., School Chancellor] Michelle Rhee closed 23 public schools in 2008, she said the school system would save money, but a city auditconcluded it actually cost $40 million.”

When Gucci-suited, slick, corporate heads gobbling up public money like Juan Rangel, CEO of UNO, get paid much more than the head of CPS, perhaps a good demand for the community to make is that these education profiteers open their books, so parents can see exactly how their money is being spent.