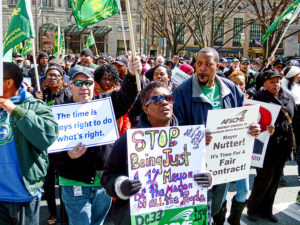 As Nutter, the mayor for the 1%, stepped to the podium to deliver his concession-laden budget address, workers rose to their feet en masse and drowned Nutter out using whistles, chanting “Contract Now” and stomping their feet until he was forced to flee the room.

Nutter finally sought the security of his private conference room to deliver his address to Council members, out of earshot of both the public and the workers who stand to be hit hardest. The workers took their protest outside, marching around City Hall, blocking midday traffic and chanting “No contract, no peace!”

Nutter has refused to negotiate in good faith with the major city unions for more than four years, forcing the workers to work without raises. His four-year stall effectively meant pay cuts for 12,500 city workers, who were forced to cover increased out-of-pocket annual health care premiums. City workers haven’t had a general pay increase since mid-2007.

Now, as he enters his last years in office, Nutter is attempting to force his version of “contract agreements” down the workers’ throats and setting a dangerous national precedent. Part of the “contract” Nutter wants to impose would drastically reduce guaranteed pension benefits for new workers, limiting them to one-quarter of final salary with additional city contributions paid to risky 401(k) accounts.

Nutter is trying to overturn a 1993 Commonwealth Supreme Court opinion that a public agency cannot declare an impasse and impose contract terms on public employees unless union members are on strike.

In the past few months, Nutter has refused to honor three separate arbitration agreements that would have given firefighters overdue pay raises, instead asking the courts to overrule them. In January, he went to the Pennsylvania Supreme Court, asking them to allow him to impose a contract on DC 33.

The administration’s anti-union drive has relied heavily on a corporate media campaign pointing to higher-than-average pension costs in 2012 to push the lie that workers’ pensions are the cause of the budget deficit. They neglect to mention that the higher payments were a one-time deal allowing the city to make up for reduced 2009 and 2010 pension contributions, which were approved by the state to get the city through the recession.

Anti-union campaign under way in Pennsylvania

Nutter’s anti-union campaign may well be the opening barrage for one of the largest “test case” attacks on public employees in a major U.S. city to date, and in a state with the fourth-highest percentage of unionized workers after California, New York and Illinois. More than 35 percent of Pennsylvania’s union members are in the public sector.

Philadelphia has long been considered a “union town.”  Some of the first unions in the U.S. were started here, as well as some of the first public services. Today, a majority of the city’s public employees, including city, transit and postal workers, are African American.

Nutter, who is African American and a Democrat, is also the president of the National Conference of Mayors. Now, in his final term, he is no doubt positioning himself for a higher national post.  Nutter was also one of the first U.S. mayors to introduce stop-and-frisk policing policies. His programs have all favored corporations at the communities’ expense.

These attacks against city workers coincide with the Philadelphia school district leaking terms of a draconian contract “offer” that would reduce teachers’ pay and benefits to 1965 levels and eliminate seniority. In 2012, public school janitors, bus drivers, and maintenance and cafeteria workers represented by Service Employees Local 1201 were forced to take $100 million in concessions when the school district threatened to outsource their jobs.

In addition to these local attacks, Pennsylvania state Rep. Darryl Metcalfe (R) is set to introduce so-called “right-to-work” legislation in Harrisburg. His bill, like the recently passed right-to-work law in Michigan, is based on an American Legislative Exchange Council model.

Metcalfe, an ALEC member, was also the chief sponsor of Pennsylvania’s racist Voter ID legislation in 2011, anti-immigrant legislation in 2009 and a key supporter of the state’s “stand your ground” Castle Law.

Meanwhile, the conservative Pennsylvania governor, Tom Corbett, spent the first half of his term gutting or outright eliminating social programs.  He has yet to directly take on the unions, but that seems to be about to change.

Prior to the March 14 City Hall protest, DC 33 called for labor and community groups to sign on to an open letter that was published in 17 city papers. The letter called on Nutter and the City Council to fully fund vital services and respect the city’s working-class families. The day before the Council meeting, more than 200 representatives from several unions in the city held a press conference outside City Hall.

Standing in Council chambers, surrounded by hundreds of city workers as we shouted down the mayor, the March 14 rally brought to mind images of the courageous workers, community activists and students who occupied the Capitol building in Madison, Wis., in the spring of 2011 to take a stand against union busting.

While Pennsylvania politicians may feel they have the upper hand, these actions by determined, angry and militant city workers and their supporters were a clear demonstration that the workers have not been defeated. Nutter may have fired the first round, but it looks like the workers are ready to fire back.