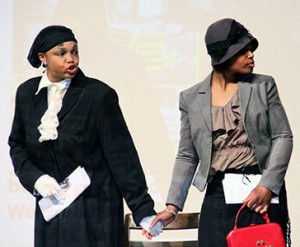 Brooklyn, N.Y. — Harriet Tubman, who was born into U.S. slavery and then escaped her captors to become an operator of the Underground Railroad, a Union Army spy and a nurse during the Civil War, was honored at Boys and Girls High School in Brooklyn, N.Y., by African-American women students and faculty members on March 16. In a powerful skit, they acknowledged the centennial of her death, which occurred on March 10, 1913. The skit was performed beautifully after only eight days of rehearsal.

Not only was Tubman paid homage in the skit, but so too was Rosa Parks, a civil rights pioneer who was arrested for refusing to give up her seat to a white man on a segregated bus in 1955. Her courageous action is widely credited for sparking the historic Montgomery bus boycott. The mass boycott, which lasted more than a year, led to the victory of Black people no longer being forced to sit in the back of the bus. Parks was born on Feb. 4, 1913, making this year the centennial of her birth. She died in 2005.

The plot of the skit centers on Parks and Tubman, who appear in modern-day time to speak to teenage women jumping rope. The two women answer questions and reflect on the challenges they faced growing up in a racist and sexist society — challenges that led them to their inspiring activist roles in progressive movements and struggles for social change, despite the different eras they came from. After listening to the two women, each teenage woman becomes inspired to speak to the audience about the societal changes she would like to see in her lifetime, like health care for all and an end to stop-and-frisk police policies in their communities.

The skit was part of a daylong event co-sponsored by the International Working Women’s Day Coalition and the Care Center, which is based in the school. Before the skit was performed, short videos were shown on Harriet Tubman’s life along with highlights from a March 9 speakout organized by the IWWD Coalition at the Triangle Shirtwaist Fire Memorial in Manhattan. The program also included spoken word, dance and solidarity messages.

The writer is a co-coordinator of the IWWD Coalition, representing the Women’s Fightback Movement along with co-coordinators Brenda Stokely of the Million Worker March Movement and Irma Bajar from Gabriela-USA, an organization based in the Philippines liberation struggle.  Go to the Facebook page, International Working Women’s Day Coalition, for more information and updates.