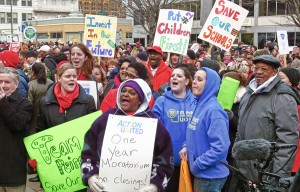 Philadelphia — The School Reform Commission, the unelected five-member group that controls the fate of public education in the fifth largest city in the USA, voted nearly unanimously in its March 7 meeting to shut down about one-tenth of the School District of Philadelphia.

The closings of these 23 schools, serving students from mostly working-class and oppressed communities, will save the school district an estimated total of $19 million, a truly insignificant amount for a district that has more than a $300 million budget shortfall. Meanwhile, some 9,000 students and their parents, plus hundreds of teachers and staff, will have their lives turned upside down.

Some 1,000 teachers, students and community members protested outside the meeting at the school district headquarters, blocking lanes of Broad Street. Speakers from the Philadelphia Federation of Teachers, Action United, Philadelphia Coalition Advocating for Public Schools, American Federation of State, County, and Municipal Employees, and other progressive, pro-public education groups denounced the closings. They called the plan “the privatization of public schools for the creation of charter schools.”

Nineteen people, including Randi Weingarten, national president of the American Federation of Teachers, were arrested in an attempt to block the members of the School Reform Commission from entering the meeting. Dozens of angry teachers, students, religious leaders, parents and community members spoke at the meeting about the negative impacts of the school closings, yet the School Reform Commission voted to spare only four of the schools on the chopping block.

If any further proof was needed to show that the School Reform Commission actively seeks to destroy public education, the leaked initial proposal to the Philadelphia Federation of Teachers should be the ultimate evidence.

The offer calls for a 13 percent pay cut for teachers making over $55,000, with lesser cuts going down to 5 percent for those who make less than $25,000. There would be no more pay increases for teachers who are National Board Certified or for those who have masters or advanced degrees. And the work day would be increased by nearly an hour. Teachers would also have to participate in professional development, bus duty, parent meetings outside work hours and other tasks without extra pay.

Seniority would be completely eliminated. Class size limits would be gone. Schools would no longer be required to have counselors or to provide such basics as textbooks, copy machines or other materials. The commission also calls for serious cutbacks to teachers’ healthcare and other benefits and the elimination of the union’s healthcare and welfare fund in favor of a district-administered program.

These proposed cutbacks are an open and vicious attack on students, teachers and all workers. The right wing, represented by the School Reform Commission and its allies, including groups like the Philadelphia Schools Partnership and the Boston Consulting Group, have deep connections to finance capital and sections of the ruling class who would like to turn public education into a private, for-profit industry.

The devastation of living and working standards embodied by this contract and the closings of 23 schools shows that the ruling class in the USA is desperate, just like in other countries where austerity measures have closed public services and education.

Meanwhile, the working class and the oppressed who are impacted by these cuts in Philadelphia and beyond are growing increasingly impoverished and hopeless. Only through uniting, organizing the teachers, parents, students and community together to demand their rights, will these cutbacks be reversed. The goal of the fightback has to be for a society based on respect, dignity, self-determination for the oppressed — a society based on humanity.