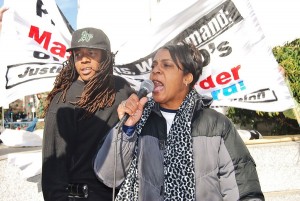 Oakland, Calif. — Shouting “Alan did not have to die; Masso has to do the time!” and “Masso, Masso, you can’t hide, we charge you with homicide!” more than a dozen protesters unfurled a banner inside the Alameda County Superior Courthouse on March 5. The banner read, “AG Kamala Harris we demand: Prosecute OPD’s Masso for murder of Alan Blueford.”

The activists read aloud a letter addressed to California Attorney General Kamala Harris that said in part: “We call upon you … to prosecute Oakland Police Officer Miguel Masso for the murder of Alan Blueford. …

“Alameda County District Attorney Nancy O’Malley is derelict in her duties with respect to the Oakland Police Department. Despite the findings of continued non-compliance of the OPD by Federal Monitor Robert Warshaw, O’Malley has functioned as a rubber stamp for the OPD. She has failed to charge a single OPD officer for any criminal wrongdoing. Specifically on the killing of Alan Blueford, our coalition did a thorough analysis of the [DA]’s findings and found them to be biased, unprofessional and extraordinarily selective in [the] use of witness statements.”

Alameda County sheriffs quickly amassed and confronted the now seated peaceful protesters. Instead of allowing them to continue their planned civil disobedience, the sheriffs grabbed them and forcefully pushed them down the stairs. Several protesters were literally flung down the stairway, sustaining severe bruises and other injuries. They continued chanting as they were shoved down the outside steps of the courthouse. A mass of 200 protesters rallying outside joined them in chanting, “Justice for Alan! Jail the killer cops NOW!”

The outdoor rally was just beginning, with people picketing in front of the building. When the civil disobedience group was evicted, the crowd surged up to the courthouse, with Jeralynn Blueford, Alan Blueford’s mother, in the lead. Speaker after speaker talked about the lack of justice in the district attorney’s failure to prosecute Masso for Blueford’s murder.

Alan Blueford, 18 years old, was about to graduate from Skyline High School in Oakland. Just after midnight on May 6, Blueford and two of his friends were waiting for some young women to pick them up on 90th Avenue when an OPD vehicle slowly pulled up with its lights off. Alan ran, and OPD Officer Masso gave chase. A few blocks later, Masso shot and killed Blueford. Masso also shot himself in the foot. More than a dozen witnesses said that Blueford had no weapon and posed no threat to the officer.

The Rev. C. D. Witherspoon, president of Baltimore’s Southern Christian Leadership Conference, stated at the rally that as long as there is no justice in the Blueford killing, all young people in Oakland will be in danger of the same kinds of police profiling, harassment and killings. He announced the May 11-13 Poor People’s Campaign and March from Baltimore to Washington, D.C.,  to protest the police murders of Black and Brown youth across the country.

Larry Hales, a national coordinator of the People’s Power Assemblies, talked about the urgent need to develop a national fightback network against these attacks on poor and oppressed communities. Adam Blueford, Alan’s father, pointed out how no Oakland police officers have yet been prosecuted for murder. Jeralynn Blueford closed the rally by asserting, “Kamala Harris, we’ll be at your office next, knocking on your door!”