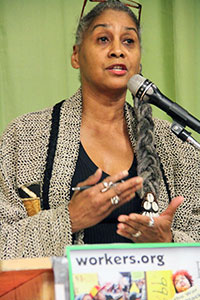 I really appreciate the opportunity to join everyone today because the issues we are raising up are so very, very important in terms of giving ourselves more direction, a sense of where we need to go. All of us sitting in this room consider ourselves to really be revolutionaries, not for patchwork, no-step reforms that don’t go anywhere and that pacify.  I’m not talking about reforms that take the foot off people’s necks so they can breathe. I am talking about those that try to misdirect people and try to take people away from a revolutionary path.

And Harriet Tubman was one of those. If you thought you were going to start out with her on this road to freedom and you got a certain way away from the plantation and all of a sudden your knees got weak and your back got bent over and you thought you were going to stop and go back and tell the master, you were only leaving one way. You were only going with her or you were not going anywhere.

What I like about some of the stuff I am beginning to read about her in this one book, “Jail Break out of History,” puts her in the proper context.

This book puts Harriet in a place where you understand the fact that we were and we are engaged in warfare. She was not just a nurse and a spy and a [Underground Railroad] conductor, but she was a guerilla warrior who went behind enemy lines repeatedly to get other people to safe haven and to free them.

She freed herself, and if you go back and read, she started as a seven year old, running away from a master who decided she was going to set the tone for how [Harriet] was going to function in this woman’s house by beating her on the very first day that she came — all across her face and her body and her back. And she ran away after that. She slept with pigs and fought with the baby pigs to try to survive. Eventually, she realized as a small child she had no place else to go, so she went back.

Another time she stood up as a teenager and blocked the exit of the overseer to keep him from pursuing a man who was running away, who was a slave, so he could not be beaten. She suffered a severe wound in her head that caused her to have a series of physical defects causing her to almost go into a coma afterwards.

But imagine all of that happening to her and she still was determined that she was not going to just be free herself, but she had a responsibility to free other people.

What are the lessons; how to apply them today

None of us here consider our primary focus in life to be an academic in an ivory tower, where we read and study, but we make no application to everyday life; where we read and study and we really don’t get the essence of the real lessons, and we also don’t know how to help other people learn. It is critical, it is incumbent upon us to make sure that we help, support and shape young revolutionaries to move forward and carry on the struggle against this monster.

To me, one of the greatest lessons from Harriet is that while she was very brave and very courageous, she never did anything by herself. She was courageous enough to stand up and play her role and do what she could do, but she was smart enough to know that no revolution could take place just by her being brave. So when they talk about her being a spy — the woman who wrote this book [Butch Lee] makes a joke about it — how can someone be a spy by themselves? There had to be a network of people. She talks about the communal nature of women, even under slavery, even under oppression. That was part of their survival: to have a communal way of both supporting each other when they were in immense pain, when their children were being taken away, when they just saw a child killed, when their men are being taken away, when they have been beaten, [that] provides that kind of support so they could continue doing what they had to do.

This book documents that Harriet was involved in freeing over 756 slaves from the major plantations on Combahee River in Beaufort, S.C., and it was a clear military act. She did this in conjunction with the Union army, but it was all organized. They had a way to send a signal out to let people know that they should come to that river and that they were going to be freed.

Because you have to have respect for who you are going up against — we are going up against a military operation. We must have something to counter that — that can only be countered by the peoples’ power, organized, conscious and strategic. Not just doing things by the seat of our pants, not just doing things without a plan. None of what Harriet did was without a plan. Never, whatever Harriet did was without a systematic connection between people and organizations that would be able to help people from one step to the next.

Even if it is five people, if everything we do results in more conscious activists, more committed people understanding what the challenge is and committing themselves to take that challenge up and fight. If you look at what [Harriet] did.

She started out, yes, through oppression that “I have been hurt real bad when the man takes advantage of me,” but it doesn’t automatically lead you to be a revolutionary. You can work on a job and know you are being screwed, but that doesn’t lead you to being an activist revolutionary trade unionist or union organizer in the workplace. Some people say, “I don’t like it here, let me go find another job,” instead of saying, “I don’t like it here, and I am going to start talking to other people about not liking it here, and we are going to talk about what we can do, and if we don’t know all of what we can do, we are going to find out.”

To me, that is one of the lessons of Harriet because you know there were no organizing or planning meetings on the plantation. So she had to seek that out. So when you find someone who is seeking out the answers to get rid of their oppression, that is an advanced worker, that is a budding revolutionary, because that person is constantly thinking and analyzing, trying to problem solve and figure out how to get out of something.

Teaching a history of struggle

Our goal in talking to people is not just selling a paper and getting into a program. Our goal is to let people know that they have a right and the capacity to be a revolutionary. That they have the responsibility to change from the numbing oppression that exists to something that is healthy, that people can flourish, that their children can flourish.

The other thing is that we need to unpackage how the media, how the school books, how the magazines, how the TV and the films, always distort and try to submerge any kind of revolutionary history. If there is some kind of fightback, there is one brave man who comes swooping in, and he takes over, and he frees everybody, and he’s wonderful, and he is superman.

What is our other role? To make sure that all means of what we do — writing, speaking, films — that we are instilling in the people and transmitting the information about the history of struggle.

So Harriet Tubman is about that history. We just talked about the heart of revolutionaries.

Harriet Tubman, in addition to all of what she did and all of what she went through, how many people she helped to empower themselves and free themselves, she also, toward the end of her days, organized for elderly, for senior people and for poor people, people who did not have any money at that time.

So if you look at Cuba, you don’t just fight to get rid of the ruling class, you don’t just fight to keep the United States off your neck. You fight to build a society where you can train other peoples’ children to be doctors, where you can have doctors that will go to other places to help save people’s lives, where you have healthy food, where everybody has a computer and books, where people have someplace to live and flourish and there is culture and music.

When we talk to people, we don’t want to frighten them by saying it is all about having the weapons like the ruling class has every day, all the time, everywhere, anyplace — that is why Trayvon got killed, because this is and always has been a militarized society.  They [the ruling class] say, “Where does all the violence come from?” It came from the moment you took your foot and put it on this land and stole the land from the Indigenous. That is where it came from, so don’t try to cover that up and act like everybody else is violent except for you.

So when we talk to people about being active, you have to be prepared to do whatever is necessary to save a nation of people who are oppressed. That might mean up to and including being a military operative like our sister Harriet Tubman.