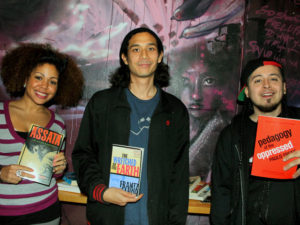 New York City police and federal marshals raided the Rebel Diaz Artists Collective (RDACBX) in the South Bronx on Feb. 28 and evicted the group from its loft space.

Producer DJ Illanoiz was the only person inside. He was awakened by armed police and told he had just five minutes to “get the f—k out.”

The locks were immediately changed. Overnight, the collective’s possessions — including sound equipment, artwork and furniture — were quickly removed and thrown in the trash.

Word spread quickly throughout activist and hip-hop circles and the South Bronx community. More than 100 people turned out for a news conference and rally to support RDACBX outside the building on the evening of March 1.

“We have served the community because we are the community,” RodStarz of Rebel Diaz, the hip-hop duo that founded RDACBX, told the rally. “When we go out and do events like the South by South Bronx hip-hop festival, or when we open the Richie Perez Radical Library and push the idea of learning about our histories through people who look and sound like us — the system is gonna feel uncomfortable with that.”

RDACBX had been locked in a long struggle with the building’s landlord, Marc Pogostin, of Austin Property Corp. The commercial developer, bent on furthering the gentrification of the South Bronx, had hiked the collective’s monthly rent from $1,400 to $2,400 in an effort to push them out.

The developer also objected to “unauthorized” murals created on the outside of the loft giving voice to people’s struggles, including “I am Troy Davis” and “No human being is illegal.”

But RDACBX fought back, gathering support from community organizations, churches, educators and local politicians, as well as carrying out a six-month rent strike.

The surprise timing and violent character of the eviction show there was more at stake than possession of the loft space. “They came in with armed officers into what is supposed to be a safe space for the community,” noted collective member Karen Louviere.

In its four-and-a-half years, RDACBX has become a major thorn in the side of New York’s rich and powerful — from billionaire Mayor Michael Bloomberg and the New York Police Department to bankers on Wall Street.

Rebel Diaz and RDACBX have been out front in organizing young people of color to fight back against racist police brutality and in solidarity with undocumented immigrants. The group has championed the case of Chilean revolutionary Victor Toro, who is threatened with deportation.

During the 2011 occupation of Zuccotti Park by Occupy Wall Street, RDACBX played a strategic role in bringing youth of color and their issues to that movement and stood side by side with OWS in its battle against eviction by the NYPD.

At the same time, the RDACBX has become a valued resource for people in the South Bronx community. In the best traditions of the Black Panthers and Young Lords, RDACBX opened its doors and made its knowledge and resources available to students and educators, independent artists and activists.

At the March 1 rally, RodStarz denounced the robbery of “a space that young people came to for after-school programming, workshops and summer youth employment, in a borough where the most common after-school activity for young people is being stopped and frisked.”

Collective member Claudia De La Cruz said, “Despite the violent removal of RDACBX from its space, [we] will continue to work on its development, as it strives to be a resource for the community. There is a need for this organization to exist in the South Bronx.”

As RDACBX begins its search for a new home, the group is asking supporters to send in their personal testimonials about the impact the collective and its space have had on them — as an organizing center, safe community space, place for artistic expression or educational resource. Readers can send their testimonials to [email protected]