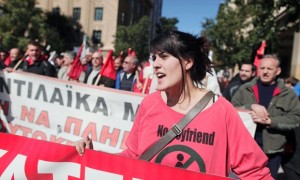 Just days before an inspection team was due to check that Greece’s new austerity measures were in place, tens of thousands of workers took to the streets on Feb. 20 and shut the country down. The strikers made it clear that “reforms” that leave patients without health care and drugs, students without education, taxpayers without money, families with no one employed, workers without labor rights and 68 percent of the youth without jobs are really attacks on the Greek people and their standard of living. (Greek Reporter, Feb. 20)

The inspection team is from the Troika — the European Union, the International Monetary Fund and the European Central Bank — which offered its first bailout to Greece in 2010 after three years of recession. The Troika offers only more austerity.

What’s worse is that, according to the General Confederation of Greek Workers (GSEE) relying on official statistics, only 600,000 workers out of 1.5 million employed in the private sector get a regular paycheck. Most employers in Greece pay anywhere from 3 to 15 months late; workers keep on working in the hopes of getting back pay or at least severance.

Many of the workers getting minimum wages are in the private sector.

Protest marches took place in 70 cities, with large demonstrations on the island of Crete, and one action attracting 18,000 participants in Thessaloníki, Greece’s second largest city. Farmers, whose access to credit is under attack by the Troika, actively blocked, in particular, the highway between Athens and Thessaloníki.

In Athens, two demonstrations followed the same route, ending at Syntagma Square in front of the Greek Parliament, both with similar demands. The Greek Communist Party (KKE) supported the All-Workers Militant Front (PAME) union confederation’s march and the other march by the GSEE, together with the Civil Servants’ Confederation. The main press services of France and Germany both reported significantly from 50,000 to 60,000 participants.

According to AFP, the main banner carried by PAME read, “No to modern sweatshops, hands off collective labor agreements.”

KKE General Secretary Aleka Papariga led a large KKE delegation at PAME’s demonstration. She told the crowd: “The working people who are suffering must take a decision. To discover their strength and advance combatively, towards the rupture and overthrow, to the very end. Otherwise, they will find themselves trapped against the wall.”

At the other march, the GSEE, the union movement close to social democratic parties, explained: “We are fighting for collective bargaining agreements, for measures to be finally taken against unemployment and to ensure our democratic and working rights.” Some of PAME’s demands made the same points.

Syriza, a major presence in the GSEE/ADEDY march, is an electoral coalition of social democratic and left parties which heads the opposition. Syriza said it wanted to use the strike as a springboard to force out the coalition government led by the conservative prime minister, Antonis Samaras. “The general strike aims to bring down the government and annul (the austerity) agreement and measures,” Syriza said in leaflets handed out this week.

Greek President Karolos Papoulias, whose role is symbolic, commented, “We are faced with a societal explosion if any more pressure is put on society,” ruminating, perhaps, over the constant barrage of pay cuts, tax hikes and slashed pensions that he nonetheless supports. (Greek Reporter, Feb. 20)