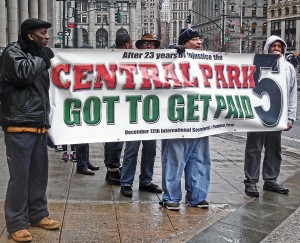 Another status conference pertaining to the Central Park 5 civil lawsuit against New York City and the New York Police Department was held on Feb. 19. Supporters filled the large federal courtroom in downtown Manhattan to indicate their justifiable outrage regarding the lack of progress in bringing closure to this horrific, racist injustice.

Twenty-three years ago, five Black and Latino teens — Kevin Richardson, Yusef Salaam, Raymond Santana, Antron McCray and Kharey Wise — were wrongfully convicted of raping a white woman who was jogging in Central Park. They spent from six to 13 years in prison for a crime they did not commit; their youth was stolen from them. In 2003, their convictions were overturned, and they were acquitted following a confession by the actual rapist whose DNA matched the evidence.

After they were exonerated, the young men filed a federal lawsuit against the city. The lawsuit claimed that they were railroaded into giving confessions, maliciously prosecuted, wrongfully imprisoned and their civil rights were violated.

The five men are now being victimized by billionaire Mayor Michael Bloomberg’s administration and stop-and-frisk Police Commissioner Ray Kelly, who refuse to accept their innocence and, therefore, award them compensation. The city contends that the NYPD and the District Attorney’s office did nothing wrong in arresting the teens, obtaining confessions and prosecuting them.

The stalling tactics of the city’s Corporation Counsel legal team have resulted in the need for additional status conferences, year after year. They have aggressively fought the lawsuit and have not cooperated with the Central Park 5’s attorneys in producing requested records, documents and scheduling depositions. Detectives Humbergo Arroyo and Mike Sheehan’s actions at the time of the teens’ arrest and afterwards are also being scrutinized. 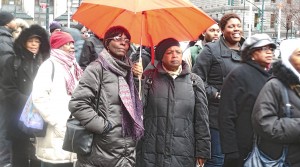 City lawyers have repeatedly offered excuses for noncompliance. U.S. Magistrate Judge Ronald Ellis questioned their methodology in searching for documents they say are unavailable, can’t locate or are in deteriorated condition. The judge warned against any possible perjury. Ellis noted that February marked 10 years since the Central Park 5 lawsuit was filed and 10 years of court costs. He stated that the discovery process has lasted too long, and that the case needs to be concluded this year, either by trial or settlement. Therefore, he will be setting deadlines.

Ellis also quashed the city’s subpoena for outtakes from filmmakers Ken Burns, Sarah Burns and David McMahon from their documentary, “The Central Park Five.” He ruled that they are protected by reporters’ qualified privilege under federal law, and that they had made the requisite showing of journalistic independence needed to invoke that privilege.

At the rally that followed the status conference, which Kevin Richardson attended, he thanked all the supporters who faithfully showed up, even in the rain, to support “the Five.” He mentioned that he, Kharey Wise and Yusef Salaam had recently gone to Los Angeles on a speaking tour. Police stopped them at the airport and questioned them about alleged drug possession. The cops then told them, “We know who you are.” Richardson said he wonders when the nightmare will end.

City Councilmember Charles Barron, who attended the status conference, stated at the rally how proud he was of “the Five.” On Feb. 12, a City Council hearing on Resolution 81-A, sponsored by Barron, was held by the 27-member Black, Latino and Asian Caucus. The resolution, which the caucus passed, had also been introduced in 2009 and again in 2010, calling for the city to expeditiously settle the Central Park 5 case without a trial, to acknowledge the years of pain and suffering of the five men and their families, and to financially compensate them for the historic and gross miscarriage of justice.

Several testimonies were heard that day, including that of Sharonne Salaam, Yusef Saalam’s mother, who vividly recalled the night of her son’s arrest and told of their stress-filled lives since then. She said she still gets death threats. Weakened by stage-4 cancer, Sharonne Salaam expressed her wish to live long enough to see the case settled and justice served, knowing there is closure to that chapter of their lives. This tenacious and determined woman also attended the Feb. 19 status conference.

The full City Council will hold a hearing on Resolution 81-A on Feb. 27. The same day the Central Park 5 will be presented with a City Council proclamation at a press conference at City Hall.