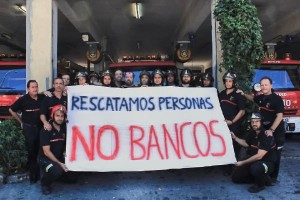 In Coruña in Galicia, Spain, firefighters refused to play the role of sheriff. They flat out defied orders to cut the chain holding the door closed at an apartment. They remained in solidarity with 85-year-old Aurelia Rey and with the 200 people demonstrating to stop her eviction on Feb. 19.

Firefighters from around the country quickly moved to show solidarity with the Coruña firefighters, who face disciplinary action. They joined demonstrations or held news conferences outside their firehouses in Alicante, Córdoba and other cities and towns from Andalusía to Asturias. Their banners read, “We rescue people, not banks.”

Some 400,000 families have been forced out of their homes, or face evictions or foreclosures across the Spanish state. The capitalist crisis broke out there first in the housing sector of the economy in 2008. It has spread so that now more than 25 percent of the workforce is officially unemployed, leading to more foreclosures and evictions.