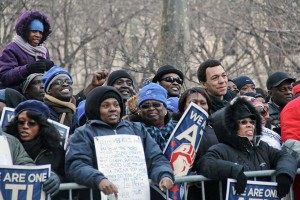 The bourgeois media made a decision to portray the end of the New York City school bus union’s four-week strike as an out-and-out victory for Mayor Michael Bloomberg.

There’s no question that Bloomberg intends to entirely eliminate the Employment Protection Provision — the job-protection seniority list at the heart of the strike. The EPP is a clause in the Amalgamated Transit Union Local 1181 contract stating that, no matter what company gets the school bus contract, the workers don’t lose their jobs.

But New York’s school bus workers’ union, 80 percent people of color and 60 percent women — who in the coldest days of winter had the courage to go on strike against a billionaire mayor and his media empire — are far from beaten. The EPP remains in nearly 86 percent of K-12 busing contracts. Specific strategies are being developed in the school busing movement to seek remedies to restore the EPP in the other 14 percent.

On Feb. 12 some 1,150 routes, which affect 2,300 jobs, were bid upon — in a room full of striking workers and school bus parents who were there to bear witness. But these contracts have not yet been awarded, signed or approved by budget authorities in the city government. 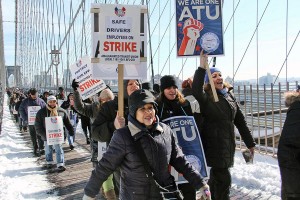 On Feb. 21, when the ARISE (Action for Reform in Special Education) Coalition and the Citywide Council on Special Education sponsored an evening speakout on the bus strike, about 50 parents showed up to blast the city’s attack on school busing.

When Sara Catalinotto, a founder of Parents to Improve School Transportation, asked parents, “How many parents here think seniority hiring is bad for busing?” nobody raised their hands.

Amalgamated Transit Union matron Jean Dileone — who is also the parent of a student with autism — told the all-news station New York 1 she felt the strike was worth it: “We fought for something that we needed.” (Feb. 16) Dileone added she would strike again if necessary.

Was the strike worth it?

Behind the bourgeois propaganda of the corporate media is the desire to demoralize the workers, both in the union and in the minds of everyone else. New York papers especially tried to paint the whole strike as a waste of time.

These papers obviously never talked to school bus driver Maria Gentile, who agreed with Dileone that the strike was worth it. “We showed the people of New York City that Bloomberg is not going to bully us around,” she told WW.

Driver Fran Rodnite agreed. “Most of us feel very positive about it.” Of the decision to end the strike, Rodnite told WW, “It’s a little setback, but in the end, we’re going to win.”

Strikes require immense sacrifice and struggle from the workers, and not everyone will view this one the same way. Still, these workers’ appraisal of the struggle differs significantly from the corporate media’s anti-worker version.

The local is in a good position to honor its commitment to fight on for EPP (with or without the politicians) because through this struggle, many of the diverse rank-and-file members have emerged as conscious, organized and strong leaders.

Also, the benefits of strikes are not necessarily confined to the workers getting what they were fighting for. When the leader of the Russian Revolution, V. I. Lenin, wrote about a wave of strikes in Russia, he said, “Every strike reminds the workers that their position is not hopeless, that they are not alone.”

Both Gentile and Rodnite related the school bus union’s fight to Bloomberg’s attacks on all city workers, none of whom have a contract, as well as to their class as a whole. “We’re not only fighting for ourselves and our jobs,” Rodnite said. “We’re fighting for every single working person out there.”

Strikes also change the consciousness of the workers to see the way the entire system conspires against them. Police were stationed at picket lines as if the workers were criminals. The media covered every utterance of Bloomberg and Education Chancellor Dennis Walcott, but refused to report that there were two non-union school bus accidents during the last week of the strike.

Ultimately, strikes teach workers who their true allies are. The government, the media, the police — the entire superstructure of capitalism — sided with Bloomberg. Democratic politicians such as mayoral candidates John Liu and Bill Thompson marched with the school bus workers on Feb. 10 — and then a week later asked them to return to work, objectively siding with the mayor.

AFL-CIO state and municipal leaders abdicated their responsibility to get out their members to support the strike. Individual trade unionists came out, reflecting the desire of the rank and file to show solidarity. But where were the considerable resources of the New York labor leadership?

True allies were found among those with shared class interests. School bus driver Josephine Guarino told WW that parents who suffered hardships as a result of the strike “didn’t blame us. They blamed Bloomberg.”

Led by groups that existed before the strike, like PIST and Common Sense Busing, parents became even stronger advocates for children with disabilities — and in the process, advocates for the EPP.

In the early days of the strike, both Bloomberg and Walcott publicly repeated the mantra, “The union is striking against the children.”

But the city, organized mainly to protect the interests of the wealthy, was simply unable to do what the school bus workers could do. And this was no ordinary strike over the production of cars or iPhones. People’s children were at stake.

Before the strike, students with disabilities had been going to school with trained matrons, on buses equipped with seatbelts and first aid kits.

Now the city was handing out free MetroCards, many of which didn’t work; putting students on subways, buses and cabs; and requiring parents to lay out cash for cab fare, sometimes hundreds of dollars a week — and not reimbursing them.

Parents learned who their true allies were. And this lays the basis for the next stage of the struggle.