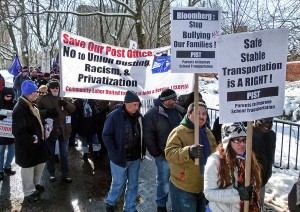 The U.S. Postal Service decision to eliminate Saturday mail delivery has generated increasing calls for protests by workers and community organizations under the common demands: “Save six-day delivery” and “Save our Post Office.”

On Feb. 5, Postmaster General Patrick Donahoe announced plans to stop delivering and collecting letters and other first-class mail on Saturdays, beginning Aug. 10.  Post office operating hours will not change but postal workers will only deliver packages and prescription drugs on Saturdays. More than 35,000 letter carriers, rural carriers, clerks and mail handlers’ jobs are threatened from the controversial cutbacks.

The surge of three days of accumulated mail every Monday will overwhelm and slow down operations, leading to more delivery errors and delays, injuries and unfair discipline procedures. Monday holidays will increase the problems.

Fredric Rolando, president of the National Association of Letter Carriers, said, “Postmaster General Patrick Donahoe’s plan to end Saturday delivery is a disastrous idea that would have a profoundly negative effect on the Postal Service and on millions of customers” and called for the immediate removal of the postmaster general.

Postal and corporate executives claim widespread Internet use is the cause of declining mail volume and increasing USPS deficits.  Privatization is their ultimate goal, postal unions counter, asserting that a 2006 congressional law unnecessarily forces the Postal Service to pre-fund retiree health benefits 75 years in advance, the real cause of the red ink.  Postal operations actually made a $100 million profit in the last fiscal quarter, if not for the congressional mandate and the overpayment of billions of dollars into two pension funds.  (nalc.org)

Save our postal service!

The National Association of Letter Carriers has called a national day of action to save six-day delivery on Sunday, March 24.

The national coalition Communities and Postal Workers United has called for local days of action the weekend of March 17 to save the postal service and to oppose all closures, cuts and delay of mail.

As part of that call, the local New York City coalition, Community-Labor United for Postal Jobs & Services, is organizing an “Emergency Postal Forum” on March 16 at Hostos College near the landmark Bronx General Post Office (put up for sale by USPS), to “analyze, strategize and unite the fight to save the Post Office.”

On the first day of curtailed Saturday services, CLUPJS “calls for treating Saturday, Aug. 10, as an illegal lockout. We encourage postal workers to report to work and force USPS to send them home. We propose community and labor rallies outside post offices nationwide on that day to make it clear communities want postal services improved, not cut. We also call for massive filing of grievances and unfair labor practice charges against this illegal attack on working conditions.” (For full statement, see clupjs.com)

Piette is a retired postal worker.