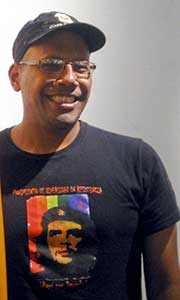 New York — Pepe Palacios, a LGBTQ leader and activist from the resistance movement in Honduras, spoke at an event hosted by the Venezuelan Consulate here on Feb. 12. Palacios described the brutal government repression in Honduras, as well as the courageous, unified resistance of the Honduran people. The event was presented by the International Action Center and El Colectivo Honduras USA Resistencia — Partido Libre. Palacios is traveling throughout the U.S. as part of a national tour organized by the Honduras Solidarity Network.

In Honduras, killings of gay men and transgender women have increased exponentially ever since a 2009 coup d’état that ousted the democratically elected president, Manuel Zelaya, along with assassinations of other leaders and participants of the resistance movement. In a videotaped interview, Palacios placed the blame for these assassinations, and the impunity of those who commit them, squarely on the back of the U.S. government, which condoned the coup and has attempted to claim that Honduras has been restored to democracy despite these atrocities. (tinyurl.com/byzq6wt)

However, Palacios also described the inspiring unity of LGBTQ people, teachers, campesinos/as, Indigenous people, youth, women and many more in response to this repression. These various sectors have come together to form the National Popular Resistance Front (FNRP), which gains more and more support as the coup government reveals its true nature.

One outcome of this burgeoning and militant resistance movement has been the formation of the Liberty and Refoundation Party (LIBRE). In what Palacios described as a first for Honduras and perhaps for Latin America, LIBRE will be running two openly LGBTQ candidates for congress — a gay man and a transgender woman — in the upcoming November elections in Honduras. LIBRE is also running Xiomara Castro de Zelaya, a resistance fighter and the spouse of ousted President Manuel Zelaya, for president.

Palacios described himself as “a socialist, feminist and Bolivarian,” and paid homage to the Stonewall Rebellion — the uprising of lesbian, gay, bisexual, transgender and queer people against police repression in 1969 — an event which occurred not all that far from the Feb. 12 event.

Other speakers included Teresa Gutierrez of the International Action Center and the May 1st Coalition for Worker and Immigrant Rights, who described a solidarity delegation to Honduras being organized to coincide with the November elections. Lucy Pagoada of El Colectivo Honduras USA Resistencia — Partido Libre called the Honduran resistance one of the most important movements occurring in Latin America and expressed confidence that the LIBRE party would win the Honduran elections.

A woman from the Afro-Honduran Garifuna community described the history of exclusion against her community in Honduras, and how the Garifuna community went out en masse to join the resistance following the coup. A woman from Puerto Rico described the many attacks against the transgender community in Puerto Rico, which remains a colony of U.S. imperialism. The song “Comandante Che Guevara” was performed by Heather Cottin, an IAC and May 1st Coalition activist, with the entire audience singing along.

At the end of the evening, a birthday cake was presented to Palacios, and he and several other activists went to the Stonewall Inn, site of the 1969 rebellion in Greenwich Village, to celebrate.