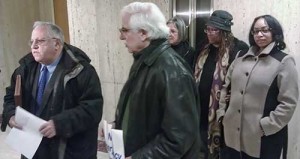 Detroit,  Feb. 14 — A Freedom of Information Act lawsuit was filed today on behalf of David Sole, a retired City of Detroit employee and a co-founder of the Moratorium NOW! Coalition to Stop Foreclosures, Evictions and Utility Shutoffs. The suit was filed because the City’s Law Department failed to release documents that Sole requested on Jan. 2 related to loans and bonds which the City and its residents are obligated to pay. The Coalition believes that most of these loans and bond issues are based upon financial instruments designed to permanently render the municipality in deep debt.

Under Michigan law the city government has five days to respond to a FOIA request. But after nearly six weeks, Sole has gotten no response to the demand for release of the financial documents.

In a FOIA request letter dated Jan. 2, Sole said that he was seeking “all contracts and agreements between the City of Detroit and all its departments and divisions and any banks or brokerage houses relating to the purchase of bonds, interest rate swaps, pension obligation certificates, hedge fund derivatives, termination of default agreements, or other forms of debt for the past 10 years.”  In addition to copies of the contracts, “all letters, emails, memos, notes or other material (written or transmitted electronically) relating to the negotiations for and the purchase of these bonds or other debt instruments” were also requested.

The letter’s demands included access to all documents regarding  “everything …  involving any and all bond swaps” and “all communications provided to Gov. [Rick] Snyder’s Financial Stability Review Board during 2012 in their work to determine the financial status of the City of Detroit.”

A delegation of members of the Moratorium NOW! Coalition and other activists accompanied Sole and people’s attorney Jerome Goldberg to the City of Detroit Law Department today to serve the lawsuit and legal summons. A press conference was held immediately afterward.

Goldberg told members of the press that the City of Detroit should release the documents so that a clear picture of the level of fraud can be revealed. “What should happen is that the city should take legal action against the banks for the fraud that is responsible for the current crisis.”

Moratorium on debt service to banks

Mayor Dave Bing delivered his annual “State of the City” address on Feb. 13. The corporate-oriented mayor reported that since he took office in 2009, the city budget has been cut by $300 million.

These budget cuts have resulted in the retrenchment of nearly 4,000 municipal workers. According to Bing, the downsizing of employees and the reduction in benefits for workers have resulted in $500 million in savings.

Nonetheless, a Financial Review Board report issued in early 2012 indicated that the city’s long-term debt was more than $16 billion. The debt-service payments (interest) alone for the city’s debt in 2010 was $597 million.

Funds needed for city jobs and the maintenance of municipal services are being utilized for debt-service payments. Despite the layoffs and benefit cuts, right-wing Gov. Snyder forced a majority of the Detroit City Council and Mayor Bing to sign a so-called Financial Stability Agreement last April 4.

This was done ostensibly to prevent the appointment of an emergency manager over the city’s finances, as has already been done in other Michigan cities such as Flint and Benton Harbor. Like Detroit, these cities have majority African-American populations.

A statewide petition campaign in 2012 resulted in a referendum being placed on the ballot in November that repealed Public Act 4, the so-called emergency manager “dictator law.” However, in December the Republican-dominated state legislature drafted and passed a new emergency manager law, which will soon go into effect in Michigan.

In January Gov. Snyder ordered yet another financial review of Detroit that many believe is a precursor to the appointment of an emergency manager, despite broad public opposition. A recent column in the Detroit News indicated that a candidate has already been selected for the unelected position and that a decision is imminent.

The Moratorium NOW! Coalition has called for a moratorium on debt-service payments to the banks. The bond rating agencies are also complicit in this crisis, the coalition says, due to the repeated downgrading of the city’s creditworthiness.

Detroit has been one of the hardest-hit cities in the economic crisis that has plagued cities around the country. The documents requested from the city will shed light on the character of the crisis and the complicity of the banks with the bond-rating agencies in creating the horrendous deterioration of conditions for Detroit residents.