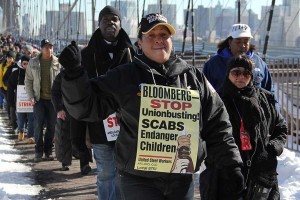 New York, Feb. 14 — Organizers with PIST — Parents to Improve School Transportation — have begun talks with union and local activists about a community response to the non-union student transportation crashes that have occurred in the fourth week of the New York City public school bus strike.

This morning, a crash occurred in Park Slope at 5th Avenue and 14th Street in Brooklyn, N.Y., where the victim was reportedly conveyed by ambulance to a hospital for injuries sustained in the incident. Safety Coach is the name of the non-union bus company involved.

Earlier this week, 14 people in the Brooklyn neighborhood of Bushwick — 11 of them children — were injured when a car was slammed into by a school bus that union sources say was operated by the non-union Fortuna Bus Company.

That crash took place at 8:00 a.m. on Tuesday, Feb. 12  — the very same day that Mayor Michael Bloomberg opened up bids to companies that are no longer required to hire school bus drivers and matrons of Amalgamated Transportation Union Local 1181, the striking union.

“This illustrates the safety issues that come up when you rely on a non-union company,” said Robin Benedetto, a school bus driver and shop steward for ATU Local 1181. “Union drivers are safe. Non-union drivers are not safe.”

widespread support in the city, including from parents and families whose lives have been upended by the strike. They say Bloomberg’s attack on the drivers’ job security is creating a climate of tension and fear — and blame the disruption in their lives on him.

“This is just one of many reasons why ‘replacement’ bus crews are rejected by parents,” said Sara Catalinotto, a PIST founder. “Leaders of PIST, the CCSE [Citywide Council on Special Education] and other parents’ councils want the mayor to negotiate and get the experienced drivers and attendants back to work. Guaranteeing their job security is how Bloomberg can guarantee the safety and IEP [Individualized Education Program] rights of bus-riding children now and in the future.”

Catalinotto — one of the speakers at a Feb. 10 rally where 5,000 union members marched for job protection — said that parents are calling for an independent investigation by Bushwick community members into what caused the accident.