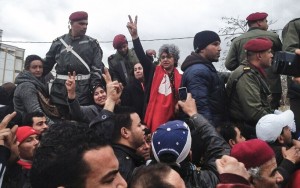 The 500,000 members of Tunisia’s union federation shut down this North African country’s major cities on Feb 8 as tens of thousands joined the funeral march in Tunis of Chokri Belaïd, slain leader of the Unified Patriotic Democratic Movement, a Marxist and pan-Arabist organization. According to reports, masked killers gunned down Belaïd in his car on the morning of Feb. 6 outside his home in Tunis.

Belaïd, along with Communist Workers’ Party of Tunisia leader Hamma Hammami, had been a major spokesperson for the most important left opposition coalition, the Popular Front. The Front was founded in October by some of the pro-socialist and left-secular parties, which got together to oppose the government. Belaïd was attacked by reactionary gangs at a public meeting just days before his assassination, and had denounced these violent actions on TV the night before.

Belaïd’s father and brother, spouse Besma Khalfaoui, and thousands chanting at demonstrations and at the funeral march blamed the leading government Ennahda Party for Belaïd’s assassination and demanded that the government resign. “I accuse Ennahda and the party leader [Rachid] Ghannouchi personally of assassinating my husband,” Khalfaoui said. (UPI, Feb. 8)

Khalfaoui invited women in Tunisia to join the funeral march to the cemetery, which is not the usual custom. They did in large numbers, according to reports from Tunis.

Ennahda headquarters in at least a half-dozen cities were set on fire in the time between Belaïd’s assassination and his burial.

Belaïd, born in 1964, had since his youth been active on the left in Tunisia. In 2005, he was one of the many lawyers who worked on the defense of Saddam Hussein, who was being persecuted by U.S. imperialism and its puppets in Iraq. International human-rights activist Ramsey Clark told Workers World that he remembers seeing Belaïd in Amman, Jordan, as “a good guy, high spirited and highly motivated.”

According to an article by Spanish analyst Santiago Alba Rico, Belaïd was not only a leader of his party but, along with Hammami, “the most visible, most publicized and most militant face of the recently created left coalition.” (Gara, Feb. 7)

Belaïd’s murder was denounced by leaders of the Ennahda Party, which is Tunisia’s equivalent of Egypt’s Muslim Brotherhood, and by the other two parties forming the “troika” government, the Congress for the Republic Party and the Ettakatol Party (Democratic Forum for Labor and Liberties, which is a member of the Socialist International). Leading European government spokespeople and even U.S. State Department spokesperson Victoria Nuland condemned it.

The revolution, which opened up a period of changes in North Africa and West Asia, succeeded two years ago in ridding Tunisia of the decades-long dictatorship of Zine al-Abidine Ben Ali. The struggle then jumped to Egypt, a much larger country and central to that part of the world. The uprising in Cairo’s Tahrir Square ended by overturning the 30-year-long dictatorship of Hosni Mubarak.

In Tunisia, Ennahda quickly became the leading party of the new government. Yet in order to form a government, Ennahda needed to form a coalition with two other non-religious-based parties that are also acceptable to imperialism. In the months leading up to the current severe crisis, this troika government has been divided on many issues and was on the brink of “reshuffling” the cabinet.

Along with these three parties, even more reactionary forces are active in Tunisia. These include the feudalist parties based on fundamentalist or salafist religion, and also the forces that were in Ben Ali’s state apparatus — the secret police and army officers, for example. One of the frequent charges against Ennahda is that its leaders have done nothing to stop the aggressive actions by these reactionary forces against the left and working-class organizations. It has even encouraged the mobilization of an anti-working-class militia of youths.

The Workers’ Party leader, Hammami, while not directly charging Ennahda with the murder, placed “political and moral” responsibility for the crime on Ennahda, the government of the “troika” and the Constituent Assembly itself. (Gara, Feb. 7)

As in Egypt, the new government following the revolution has been unable or unwilling to take steps to improve the living conditions of the workers, peasants and all the poor of Tunisia. Indeed, without challenging the capitalist structure and breaking with imperialism, no real changes could be made. Neither Ennahda nor its partners have any program directed at making these necessary changes.

Ennahda is also having internal problems. Prime Minister Hamadi Jebali’s plan to form a “technical” government involving more of the parties was rejected by his own party’s representatives in Parliament.

This disunity within the government is countered by a growing unity among all its opposition, even those without ideological agreement. The Patriotic Front and the right-of-center Call Party joined on Feb. 7 in the demand that the government resign.

The left forces in Tunisia at this moment have the UGTT labor confederation with them, along with the angry sentiments of the most progressive sectors of the masses. The general strike drew the support of the European Trade Union Council.

On the other side is the Ennahda Party, which has a mass base, their pro-capitalist partners and the even more reactionary opponents of the revolution, forces that all have the backing of world imperialism against any move to the left.

Even if Ennahda is forced to relinquish the government, this latest phase of the Tunisian revolution is only beginning.