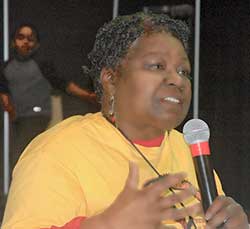 To set the tone for the discussion, Harris read a quote from a speech that King made in 1968 building for the Poor People’s Campaign, words that could have been spoken this January:

“For years I labored with the idea of reforming the existing institutions of society: a little change here and a little change there. Now I feel quite differently. I think you’ve got to have reconstruction of the entire society. … We as a nation must undergo a radical revolution of values. … When machines and computers, profit motives and property rights, are considered more important than people, the giant triplets of racism, materialism, and militarism are incapable of being conquered.”

Harris explained how the Rhode Island People’s Assembly has consistently begun each year with this gathering the Saturday after the King holiday.

“The Assembly is in two segments. In the first segment we analyze and discuss the general conditions we face at the local, state, regional, national and worldwide. … What [is] the same as last year and what important new developments have occurred. In the second segment we share specific details of the issues, campaigns and events on the agenda of the various groups.

“Out of this, we all gain a comprehensive overview of the whole battlefield” and build a unified strategy and timeline that supports each other’s separate battles and campaigns, and also brings everyone together for major mass mobilizations and events, she said.

“With this socioeconomic system continuing to decline and decay, and conditions steadily getting worse for us and our planet,” Harris projected that the RI Peoples Assembly will now also convene a Summer All-Peoples Assembly, and will send representatives to the regional and national Peoples Power Assemblies when they are convened.

Kathy Lessuck discussed the founding of the RI Peoples Assembly in 2006 and its goal to coordinate and strengthen the work of many grassroots groups and “build a lasting and permanent House of Peoples Power in Rhode Island,” eventually linking to a chain of grassroots People’s Assemblies all across the country, and at the national level in a National Peoples Power Assembly.

Bill Bateman looked back in history at one of the world’s greatest examples of victory via all-peoples unity in action, the historic event which occurred exactly 70 years ago when 100 nationalities of the Soviet Union fought and worked together in the Red Army and Civilian Brigades to defeat the Nazis at Stalingrad, and turned the tide of World War II.

Victoria Ruiz reminded everyone that capitalism has always used racism and anti-immigrant campaigns to create scapegoats and split the working class at home, and in fact it is its never-ending economic exploitation and military intervention in other people’s lands which forces people to leave their homes to come here.

The group compiled a six-month timeline for events and anniversaries, including the 40th anniversary of the occupation of Wounded Knee (Feb. 27), International Women’s Day (March 8), the 45th anniversary of Dr. Martin Luther King’s assassination (April 4), May Day (May 1), and the 150th anniversary of Union victories at Gettysburg/Vicksburg (July 4).

The participants took turns speaking for three solid hours of excellent comment and discussion on every issue facing the people, from their local communities to issues of global justice and solidarity.

At the end of the day, the inescapable conclusion was that 150 years after the Emancipation Proclamation and 50 years after “the dream,” for every great historic step forward by the people there seems to have always been an equal and opposite systemic reaction trying to force us backward.

All vowed to keep their marching shoes on, and to stay on the freedom road, moving forward towards Dr. King’s dream.