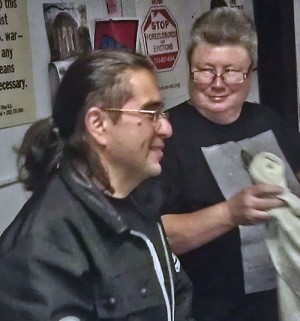 Detroit — After 72 heroic days, Jorge Parra, the president of Asotrecol, the Association of Injured Workers and Ex-workers of General Motors Colmotores in Colombia, ended his liquid-only fast on Jan. 31.

In a statement announcing the lifting of the hunger strike, Asotrecol said Parra “took this step in anticipation of a close cooperation between Asotrecol and U.S. labor in working for a just resolution with [GM] at the corporate level of the grievances arising from the unjust and illegal firings of autoworkers hurt on the job at GM’s Colombian subsidiary, Colmotores. Asotrecol’s tent occupation across the street from the U.S. Embassy in Bogotá, in its 550th day at the beginning of February, continues, as does the campaign to compel General Motors to agree to redress this injustice.”

Asotrecol’s goal has been justice for the hundreds of Colombian GM workers fired after suffering injuries caused by the terrible conditions inside the Bogota plant. The pressure campaign began when 68 injured workers set up an encampment outside the U.S. Embassy in Bogota on Aug. 1, 2011. Showing incredible courage and fortitude, a small group of workers and families has kept the occupation going over 18 months.

A year after starting the occupation, these workers went on hunger strike, sewing their lips shut. Later in August, Asotrecol rejected an insulting GM offer of compensation to the workers still in the encampment. The second hunger strike was suspended when it appeared that discussions between GM and the United Auto Workers would lead to a solution.

Parra has been in Detroit since Sept. 4 trying to get a meeting with GM corporate executives to present extensive documentation of the working conditions that left workers incapable of working and the corrupt practices that led to their denial of workers’ compensation. Parra’s third hunger strike began Nov. 20 when it was clear there had been no movement on the part of GM toward resolution of the workers’ claims.

The international movement in solidarity with Asotrecol — whose primary demand is reintegration into the GM workforce on jobs the workers can perform with their limitations — has engaged in demonstrations, social media protests, solidarity fasts, auto dealer visits, media exposure, fundraising for the encampment families and, most recently, an Occupy Wall Street-style “mic check” inside Detroit’s North American International Auto Show.

During his stay in Detroit, Parra has spoken at meetings of unions, churches, housing rights activists, students, peace groups and others, and attended actions supporting Walmart workers, in solidarity with Palestine and Venezuela, to stop foreclosures and other struggles.

While there may be new signs that the situation of Asotrecol workers is closer to being resolved, protests will continue until GM agrees to review Parra’s extensive evidence of the injustice perpetrated by GM Colmotores. While GM is celebrating billions of dollars in record profits, Asotrecol’s supporters are crashing the party and exposing the brutal working conditions in one of the corporation’s most profitable plants.