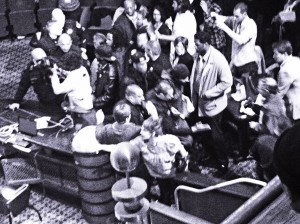 Over 600 Oakland activists packed the City Council chambers, the balconies and four overflow rooms on Jan. 22. Most came to speak against the proposed hiring of William Bratton as a consultant to Police Chief Howard Jordan. The meeting lasted until 2:50 a.m.

Some 250 people signed up to speak, a record. In eight hours of testimony, the overwhelming majority were vehemently opposed to Bratton and the notorious stop-and-frisk and zero-tolerance policies he enforced in New York and Los Angeles.

Yet despite the clear message from the community, the Council voted 7 to 1 to approve hiring Bratton.

Council President Patricia Kernighan had tried to pack the chambers with her neighborhood watch group, sending them an email to “come in large numbers to this City Council meeting and fill the seats.” Her email, forwarded to this reporter, described her strategy: “If most of the seats have been taken by ordinary folks who value an orderly and peaceful process, there will not be enough room for a large presence of the hecklers.”

Kernighan stacked the beginning of the testimony with a number of Black ministers concerned about crime. Bishop Bob Jackson, pastor of Acts Full Gospel Church, talked about “the help we desperately need in Oakland” and “the blood of black and brown boys on the street, gunshots every day, automatic weapons being used in our community.”

Minister Keith Muhammad of the Nation of Islam disagreed with their conclusions. He called for more attention to crime prevention that “won’t come from more police” and talked about the “conditions of poverty” in Oakland. He said, “I’ve been able to sit with the last five Oakland police chiefs, and they all said this is not a problem they’re going to arrest their way out of.”

Cat Brooks, co-chair of Onyx, said, “Last week [at a public safety committee hearing] a broad representation of Oakland communities said that ­Bratton is not the answer. Shame on you, Council, for dumbing down the debate between Bratton and safety. We are the biggest victims of Bratton’s stop-and-frisk ­policies. We need to stop this vicious cycle of arrest-prison-release and then ­re-imprisonment. Our prisons are full, but we still have crime.

“All these pastors undoubtedly preached about Martin Luther King yesterday [MLK holiday]. But what would Dr. King do? He would not abide by supporting the very institutions that were beating, hosing and killing our people. He’d go to jail rather than trust our welfare to racist, violent police actions. You talk about crime. But what causes crime? Poverty causes crime. What about the right to a living wage? What about the right not to be pushed out of our neighborhood by gentrification?”

Speaker after speaker made it clear that Oakland has had enough of the Police Department’s de facto stop-and-frisk practices, despite Chief Jordan’s claims that “I do not support stop-and-frisk. I support constitutional policing based on reasonable suspicion.”

Adam Blueford, whose son Alan, 18, was killed by Oakland Police Officer Miguel Masso last year, said, “This stop-and-frisk thing will blow up in your face soon. Three days after Martin Luther King’s birthday, are we going to give up our rights? … Oakland is very diverse. They say that 80 percent of people stopped and frisked are Black and Brown. I’m here to speak against stop-and-frisk. If we adopt this, we take away our freedom.”

Joe Keffer, of Service Employees Local 1021, said, “We and three other unions have supported Justice for Alan Blueford. … Bratton’s not in the interest of the people of Oakland. Focus on social and economic justice instead.”

Fred Hampton Jr. described how he and his associates had been pulled over the previous evening in neighboring Emeryville, supposedly related to a cell phone theft. Referring to the Oakland police, he said: “The most notorious gang in the city attacked us on the eve before this hearing. These are the enemies of our people. I call them terrorists. … It’s not a war on guns, gangs or crime; it’s a war on our Black asses. We are subjected to domestic terrorism on a daily basis. … We the people are the victims; the state is the criminal.”

Sanyika Bryant, of the Malcolm X Grassroots Movement, declared, “Every 36 hours a Black person is murdered by police or vigilantes. I was raised in L.A., at the height of the Bloods and Crips era. … I’ve seen how Bratton dismantled this truce, how he attacked Black and Brown youth. I’ve seen the attack of the OPD on a peaceful May Day gathering. Bratton is internationally despised for his militarization of police wherever he goes.”

Omar Yassin, from Occupy Oakland, described how six months ago he participated in reopening a library in the San Antonio neighborhood that had been vacant for 10 years. “The city administrator sent all available officers to shut us down.” When Yassin insisted on finishing his talk, police were deployed to remove him from the Council chambers.