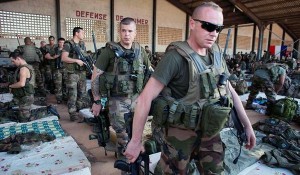 French soldiers in Bamako, the capital of Mali, on Jan. 14.

The war that French imperialism has escalated in its former West African colony of Mali has now spread to neighboring Algeria. There, some 82 people have been reported killed after an attempted seizure of hostages at a natural gas field. Imperialist governments are lining up for a long intervention in Africa.

Earlier, President Francois Hollande had deployed some 2,000 troops to carry out France’s intervention in Mali, with another 500 military personnel on the way. French air strikes have continued in the north and central regions of this vast country. U.S., British, German and Dutch imperialism back Hollande’s effort to use a sectional conflict between the Tuareg people in the north and the central government in Bamako as a pretext for French and NATO intervention.

The NATO-member states have pledged transport planes, military advisers and intelligence coordination for the French operations.

Despite a French news ban, some reports have come through of atrocities by the French intervention forces and the Malian troops accompanying them. Reprisals are ongoing against the Tuareg, Arab and Fulani ethnic groups in the north and other parts of the country. French planes have bombarded Gao, Timbuktu and Kidal in the north. In Mopti in the central region, there are reports of arrests, interrogations and the torture of civilians. (Observer, U.K., Jan. 19)

On Jan. 20, French planes bombed Diabaly. The town of 35,000 had been taken by opposition groups after the French intervention, and French-led forces have yet to retake it. The Jan. 19 Observer published reports from people in the Fulani ethnic group in Mopti describing atrocities committed by the Malian army against their people.

One said: “[T]he soldiers can tell from our dress that we come from the north. Because of that the army suspects us — if we look like Fulani and don’t have an identity card, they kill us. But many people are born in small villages and it’s very difficult to have identification.”

French jets bombed the town of Konna under the pretext of rooting out “Islamic terrorist” groups. Malian Justice Minister Malick Coulibaly acknowledged that his government’s armed forces also carried out abuses both before and after the French intervention.

After much outside pressure, the Malian government had formally requested that the Hollande administration enter the country. In an effort to build a case for foreign involvement, the Bamako regime also invited the International Criminal Court based in The Hague, Netherlands, to investigate alleged abuses by its opponents.

These opponents include a Tuareg separatist group, the Movement for the National Liberation of Azawad, which has a long history of struggle in Mali’s north. The imperialist media lump this Tuareg secular group with the groups Ansar Dine, Al-Qaeda of the Islamic Maghreb, and the Movement for Unity and Jihad in West Africa. The last have a religious ideology and are accused by the imperialists of maintaining links with the broader Al-Qaeda organization in the region.

Early in 2012, these groups killed Malian troops in attacks on the town of Aguelhok. Following these attacks, Capt. Amadou Sanogo led a military coup on March 22. Sonogo, like other Malian officers, was trained in the U.S. by the Pentagon. These events also brought about the appointments of interim President Dioncounda Traore and former Prime Minister Cheick Modibo Diarra. Diarra holds a U.S. passport and has represented Microsoft in Africa.

The Malian interim government has cited the clashes in Aguelhok and alleged abuses by its opponents in Gao and Timbuktu as justification for requesting an ICC investigation. The African Union has in the past heavily criticized the ICC for its exclusive targeting of African government leaders, such as President Omar Hassan al-Bashir of the Republic of Sudan.

Regional governments in West Africa held a summit meeting in Abidjan, the capital of Ivory Coast, on Jan. 19. France has been pressuring the Economic Community of West African States to supply up to 5,500 troops to back up the French military invasion.

Nigeria, Senegal, Togo, Guinea, Benin and other states have pledged to deploy troops. Forces from Senegal and Nigeria are already reported to have arrived in the capital of Bamako.

But opposition to the intervention in Mali is also growing throughout the region. A demonstration was held outside the French Embassy in Cairo on Jan. 19. The Egyptian government has openly spoken out against the French military actions.

In Mauritania, opposition is widespread, from political parties ranging from the Islamic community to the left, which has criticized the French Socialist Party under Hollande for its actions in Mali.

The Algerian media have expressed strong criticism of France and published reports of anti-intervention demonstrations.

Meanwhile, in neighboring Algeria on Jan. 16, a group called “Signatories in Blood,” headed by Algerian national Mokhtar Bel-Mokhtar, seized hundreds of Algerian workers and some foreign nationals as hostages at a facility in the In Amenas gas field, owned and operated jointly by British Petroleum, Statoil of Norway and the Algerian government.

The hostage-takers’ political demands, in exchange for the release of the captives, were that France cease its military operations in Mali and that Algeria forbid Paris the use of its air space for the war. They also wanted the U.S. to release several people imprisoned in connection with the 1993 bombing of the World Trade Center, as well as Dr. Aafia Siddiqui, a Pakistani national. Dr. Siddiqui is serving an 86-year sentence in a maximum security prison in the U.S. despite broad appeals within Pakistan for her repatriation.

Two assaults on the gas field facility by Algerian Special Forces left 82 dead, including dozens of Algerian workers and some foreign nationals, along with some 30 Signatories in Blood combatants, according to reports on Jan. 21. Deaths among foreign nationals have included at least seven from Britain, one from the U.S. and a Romanian. Many others are still unaccounted for.

Algeria has been under tremendous political pressure from the U.S. to become directly involved in the war against Mali. There was intense criticism inside the country over the Algerian government’s decision to allow the French military to fly over Algerian air space. Algeria is also a former French colony, where the people waged a successful war of national liberation between 1954 and 1962 to win independence.

Before retiring as U.S. Secretary of State, Hillary Rodham Clinton traveled to Algeria in an effort to get the oil and natural gas supplier to enter the war in Mali. The Algerian government has been reluctant to get involved and has had strained relations with the authorities in Mali, including the military.

The French government seized upon the hostage-taking at In Amenas as a further pretext for its intervention, calling it “an act of war” and saying its Mali intervention will continue as long as necessary. British Prime Minister David Cameron likewise called for international efforts to wage war against Al-Qaeda in Africa.

U.S. Africa Command head Gen. Carter L. Ham has claimed that Mali represents one of the largest areas in the world where Al-Qaeda has a base of operations. In a December address at George Washington University, Ham asserted that groups designated as U.S. enemies are increasing their coordination in West and North Africa. (Times of Malta, Jan. 20)

Such statements from a high-ranking Pentagon official portend greater U.S. military intervention in Africa. The anti-war and social justice movements inside the U.S. must rise to the occasion and provide the leading force to oppose this renewed imperialist push to exploit alleged terrorist threats as a pretext to seizing Africa’s resources.