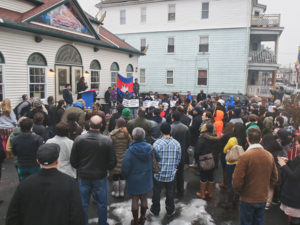 The Southeast Asian community in Providence, R.I., especially youth, have been enduring a steadily increasing amount of racial profiling, stop-and-frisk shakedowns, pretext vehicle stops, harassment and intervention by police. The last straw was when police raids terrorized two separate Cambodian households in the West End of Providence on the night of Jan. 9.

The press conference was held at a Buddhist temple just a few houses away from one of the raided homes. It was chaired by Mary Kay Harris, of the Rhode Island People’s Assembly. Jeannie Dy-Harris (no relation) listed the violence, harassment and degradation her family members suffered, telling those assembled, “Police abuse [Asian] people because they think we’re too afraid to speak up. We are urging people in our community to join us, stand strong and protect our families.”

The ad-hoc coalition demanded a public apology from the city and called for an end to racist policing in Southeast Asian neighborhoods. It called everyone out to march to police headquarters on Jan. 17 and to rally in support of the 2013 [anti-]Racial Profiling bill at the Rhode Island State House on Feb. 4, Rosa Parks’ 100th birthday.