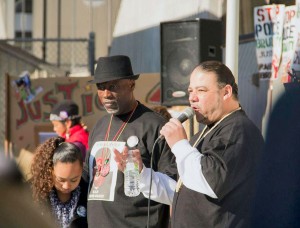 On New Year’s Day, family and supporters marked the fourth anniversary of the killing of Oscar Grant by Bay Area Rapid Transit police officer Johannes Mehserle. Grant’s daughter, Tatiana, pictured here, was four years old at the time. After Mehserle won a change of venue to Los Angeles, he was found guilty of the lesser charge of manslaughter. Attorney John Burris is still pressing for federal murder charges against Mehserle.

The killing was well documented on video and broadcast worldwide. Grant was restrained and unarmed when Mehserle shot him in the back. Mehserle was sentenced to two years, minus time served in the Los Angeles County Jail. Also pictured are Grant’s uncle, Cephus “Uncle Bobby” Johnson, and Jack Bryson, whose son was with Grant when he was killed.