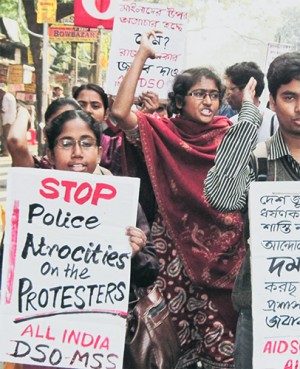 An outraged mass movement has brought hundreds of thousands, mainly women, into the streets of India to protest rape and government inaction toward the perpetrators. This explosion of anger and despair was ignited by a horrendous incident in Delhi, which is fueled by many years of rising violence against women.

On Dec. 16, a young woman student boarded a bus in Delhi accompanied by a male friend. The bus kept circling a 20-mile area in South Delhi while six men inside the vehicle raped her and also beat her and her friend with iron rods. The bus’ tinted windows concealed the savagery within as it rolled, unstopped, through a series of police checkpoints.

Almost an hour after they got on the bus, the couple were thrown off, battered and bleeding. A statement by the 23-year-old physiotherapy student provided an account of the horror she and her friend had experienced that night. The woman was violated so brutally that her intestines had to be removed. She died days later of internal injuries.

A deluge of outrage against this crime brought thousands of people into the streets of Delhi in protest. Police attacked the demonstrators on Dec. 21 with tear gas and lathi (5-foot bamboo sticks). With temperatures in the 40s, police sprayed the protesters with water cannons. To discourage protests, the Delhi government shut all roads leading into the area, closed nearby Metro stations and bus routes, and deployed hundreds of police officers. (New York Times, Dec. 29)

But instead of being subdued, the protests spread all over India. Trivandrum, Chennai, Mysore, Bangalore, Kolkata, Patna and Cuttack saw thousands of angry demonstrators take to the streets.

Crimes against women in India

Patriarchy and misogyny are deeply entrenched in India’s class and caste system. More than 60 percent of women in India live in extreme poverty.

In the last five years, 27 of the candidates for state elections fielded by Indian political parties were men who had faced charges of rape. Police are complicit in cover-ups and are infamous for ignoring rape complaints. In the state of Karnataka, only four people were convicted of rape in 2011, although an average of 500 women have reported being raped there every year since 2006. (The Hindu, Dec. 31)

A study conducted jointly by the Indian Council of Medical Research and the Harvard School of Public Health established that girls under five years in India were dying at an abnormally high rate because of the prevalence of domestic violence targeting females in their homes. Over the last two decades, 1.8 million girls under the age of six have been killed. Infant girls less than a year old are at a 50 percent higher risk of dying than boys of the same age, while girls who survive that perilous first year have a 21 percent higher chance than boys of dying before their fifth birthday. (Archives of Pediatrics & Adolescent Medicine, Jan. 3, 2011)

In India as a whole, more than 24,000 rapes were reported in 2011, registering a 9.2 percent rise over the previous year. Some 54.7 percent of those attacked were between 18 and 30 years old. According to police records, the attackers were known to their victims in more than 94 percent of cases. More than 19 cases of child rape are reported in India every day.

Police records from 2011 showed an alarming increase in all types of violence against women. Trafficking increased by a staggering 122 percent, while kidnappings and abductions of women rose 19.4 percent, molestation by 5.8 percent, torture by 5.4 percent and killings in disputes over dowry payments by 2.7 percent. (BBC, Dec. 29)

The sex industry, which turns huge profits, promotes misogyny. India has become the third-largest user of pornography in the world. (The Hindu, Dec. 30)

Economists Siwan Anderson and Debraj Ray estimate that 2 million women in India “disappear” each year. Roughly 12 percent of them disappear at birth, another quarter die in childhood, some 18 percent go missing at the age of reproduction, followed by 45 percent at older ages. The researchers found that women died more from “injuries” in a given year than while giving birth; the injuries indicated they suffered from violence. Each year in India more than 100,000 women are killed by fires.

The Socialist Unity Center of India (Communist), which has participated in the protests all over India, sees this rapid degradation of women as “a deliberate design of the ruling capitalist class to pollute the mind to view women [as] sex objects … to dehumanize the people. … The current phase of dying capitalism [incites] ugly self-centeredness, greed, vile self-consumptive urges and perverse proclivities of relishing commoditization of women,” exacerbated by “capitalist globalization.” (suci-c.in)

SUCI (C) member Sumathi Venkatachalapathy writes: “All the servitors and defenders of ruling capitalism are squarely involved in either perpetrating or abetting murderous assault on the life and dignity of women. One would find that in many of the rape and other cases of atrocities on women, the accused are either political figures, village touts, mafia dons enjoying political backing or army personnel, police officials, close relatives of industrialists and persons in the proximity of the power-wielders. … [Many a] bourgeois party, in power or in opposition, has long criminal records including atrocities on women.” (Facebook post, Dec. 23)

This uprising of Indian women points to a significant step forward in the mass movement. Karl Marx wrote, “The change in a historical epoch can always be determined by the progress of women toward freedom. … The degree of emancipation of woman is the natural measure of general emancipation.”

A young male activist from Hyderabad, Ramesh Dso, wrote to Workers World, “She died, but still youth are protesting without rest. We also took up massive protests to mourn and rally everywhere. It is a great step in India.”