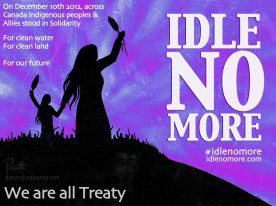 “Idle No More,” a movement led by First Nations (Native) peoples in defense of the water, the land, the sky and their treaty rights, has swept across Canada like wildfire. It is a movement formed by Indigenous women that has been joined by thousands of Native people, allies and now people from around the world.

Throughout Canada and internationally, many have come out to insist that Indigenous sovereignty must be respected. Trains and highways in Canada have periodically been blocked. Native round-dance flash mobs have shown up at shopping malls. Indigenous people from reservations large and small have come out to demonstrate their support.

Social media have been used extensively as an organizing tool. Canada’s cities from Halifax to Ottawa to Vancouver have seen large marches of Native people and their supporters.  This is the largest Indigenous movement in Canada since the 1990 resistance at Oka and Kahnawake.

In part, the upsurge in Idle No More was sparked on Dec. 4, when First Nations representatives were physically prevented from entering the House of Commons in Ottawa, where they had planned to raise their concerns about proposed legislation that would have a tremendous impact on First Nations.

Via Omnibus Bill C-45 and other legislation, Canadian Prime Minister Stephen Harper and his Conservative government are attempting to gut protections of thousands of waterways and to bypass and destroy the treaty rights of First Nations and make harsh budget cuts that would impact many Indigenous lives. Harper and his government refuse to consult with First Nations about these hastily pushed-through pieces of legislation that will have immense implications for First Nations.

In Ontario, Attawapiskat Chief Theresa Spence has been on a hunger strike since Dec. 11.  She has said that she will fast until Harper agrees to meet with her and other Indigenous leaders; others including 72-year-old Emil Bell have joined in her fast. So far, the prime minister has refused any consultation with Chief Spence or any other First Nations leadership, despite months of requests for him to do so.

Pent up pain and anger

The root of the Idle No More response is the colonial relationship that Canada has with Native peoples, who continue to experience a lack of adequate housing and sanitation, high unemployment and incarceration rates, high suicide rates and ill health, reduced life expectancy, and lack of educational opportunities for youth while living in a wealthy country built on their stolen land and resources. Idle No More is a manifestation of the pent-up pain and anger that Native people carry from generations of suffering under colonialism.

Melaw Nakehk’o, who helped to organize protests in Yellowknife [Northwest Territories, Canada], said, “It’s a movement, it’s a continuous thing. It not only has to do with the bills that are passing through, it’s just that we’re not going to be idle anymore. We’re not going to take it anymore.” [Northern News Service, Dec. 24]

In 2008, Harper publicly apologized for the residential school system that devastated thousands of Native families and promised to forge “a new relationship” based on “partnership and respect.” Since that time, however, the Harper government has cut First Nations health funding, gutted environmental review processes, refused to participate in land claim negotiations, ignored the more than 600 missing and murdered Indigenous women across Canada, withheld documents from the residential school Truth and Reconciliation Commission, and cut funding for First Nations educational and child welfare agencies.

Indigenous people are the fastest growing population in Canada, with many youth who are very conscious of the history of injustices against their people.

Progressive non-Native Canadian activists have been supporting Idle No More, both because they recognize the importance of treaty obligations and because the attacks on Indigenous peoples are part of widespread attacks on working people and the environment, part of selling off Canada’s natural resources and opening up the lands for even further corporate exploitation.

Indigenous peoples throughout the world — who have no borders in the struggle — and their supporters have been standing singly, in small gatherings, in flashmobs and rallies of a thousand or more, to support Idle No More.

For more than a generation, Indigenous peoples have been issuing warnings, about the need to respect their treaty rights, and about the threats to the water and the earth.  It is time for others to listen and Idle No More.