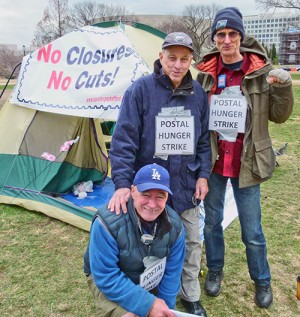 Washington, D.C. — Postal workers carried out a six-day encampment and hunger strike once again in Washington, D.C. This time they stalked the congressional lame-duck sessions that threaten to tear down the U.S. Postal Service.

Rather than reversing the Postal Accountability and Enhancement Act (PAEA), however, reactionary anti-union legislators want to further cut postal services, for example, by eliminating the sixth delivery day.

No closures, no cuts

Five hunger strikers occupied the office of Rep. Issa on Dec 20.  “Issa needs to back off his campaign to wreck the Postal Service.  We demand that he immediately declare his commitment to preserve six-day mail delivery,” said Dave Welsh, hunger striker and retired letter carrier from San Francisco.

“Not the Internet, not private competition, not labor costs, not the recession — Congress is responsible for the postal mess,” said hunger striker Jamie Partridge. “Corporate interests, working through their friends in Congress and the presidency, want to undermine the USPS, bust the unions and then privatize it.”

Four of the strikers were ejected by Capitol police while one, John Dennie, a retired mail handler from New York, was arrested. He was released three hours later, charged with “blocking an entrance.”

Dennie’s earlier attempt on June 28 to make a citizen’s arrest of Postmaster General Patrick Donahoe in front of USPS Headquarters also led to his detention by police, who later released him without charges.

That action was part of a week-long hunger strike by ten Community and Postal Workers United activists to point out that Congress was starving the Postal Service.

It was the 2006 lame-duck Congress that passed the PAEA on a voice vote. This act forces the USPS to pre-fund retiree health benefits 75 years in advance. By building in these high costs at the front end, it will bankrupt the Postal Service if it remains in force.

The Postal Regulatory Commission released a report in November 2012 stating that not only would the Postal Service have been profitable without the mandate, the service has also overpaid tens of billions of dollars into two pension funds. (www.prc.gov)

Thirteen thousand jobs have ­already been eliminated and delivery standards relaxed. “Extensive disruption has resulted from these plant closures,” said Dennie in a letter delivered to the Postal Board of Governors on Dec. 21. Criticizing Postmaster General Patrick Donahoe’s announced plans last May that he would close half the mail sorting plants in the country and cut hours from 25 to 75 percent in half of the nation’s post offices, the document accuses Donahoe of “criminal delay and obstruction of the mail and calls for his termination.”

“Take away a parent’s job, take away a child’s future,” said Victoria Panell, youth leader of the National Action Network, last June. Twenty-one percent of postal jobs are held by African Americans. The Postal Service is the largest employer of Black workers making over $55,000 annually.  Many of those jobs are threatened by ongoing and planned postal cutbacks in jobs and services. (multiculturallife.org)

Rural communities and oppressed neighborhoods will be especially hard hit by the USPS drawdown through the loss of postal services as well as the decrease in well-paying career jobs with health care and pension benefits.

The hunger strikers have called on postal management to suspend cuts and closures and allow Congress to fix the finances by repealing the pre-funding mandate and refunding the pension surplus.

The postal hunger strikers rode a banner-draped horse and carriage from the Postal Museum to the White House to celebrate the 237-year history of the Postal Service and 150 years of Saturday delivery (city free delivery was established in 1863).

They attempted to deliver a giant postcard calling on President Obama, who has twice allowed for cutting six-day delivery in budget proposals, to instead use his veto power to save six-day mail delivery, if necessary. “We helped elect Obama and he owes us,” said Ken Lerch, Letter Carriers union (NALC) Branch 3825 president.

Outside the headquarters of the NALC, President Fred Rolando joined the contingent for a short period.

Completing the sixth day of their hunger strike to save six-day delivery, five postal workers broke their fast and declared a people’s victory.

“Along with thousands of postal workers and our community allies, who have been battling to save America’s Postal Service, we were able to raise awareness and increase pressure on the decision-makers as they attempted to wrangle backroom deals,” said Partridge, a retired letter carrier from Portland, Ore.

If no postal bill is agreed to by the lame-duck Congress by Jan. 3, it will be up to the new incoming Congress to craft a bill to either save the Postal Service, or to push it further on the path to the destruction of hundreds of thousands of jobs and the elimination of low-cost postal services.

Can community organizations, postal workers and their labor organizations unite into a strong enough movement to force the 113th Congress to do the right thing? Can the challenge to save the post office unite with the upcoming struggle against austerity and force back the right-wing attacks on the working class? A mass rally of thousands of workers, postal as well as other workers, is called for. Will the future deliver?

Joe Piette retired from the USPS in 2011.