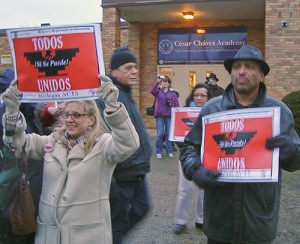 Seventy percent of the teachers at the César Chávez Academy in Detroit have signed up to join the American Federation of Teachers. With 140 teachers at four schools, CCA is the largest charter school in Michigan. Until now, privatizing schools has been a union-busting tactic in the state and around the country.

Teachers called a solidarity rally outside one CCA campus on Dec. 20. Over 150 teachers, parents, children and other unionists showed that the teachers have broad support. The Leona Group, which manages CCA, has been hostile the teachers’ efforts to unionize.

One teacher told this reporter that many teachers at his CCA school were scared. However, actions by the administration were driving more and more of them toward the union. He was upset that raises were given to two of his co-workers — but not the rest — and that management unilaterally changed workers’ medical benefits on Oct. 1.

AFT Michigan has been organizing under the Alliance of Charter Teachers and Staff — or ACTS — to win union members from this large, nonunion sector of the education community.