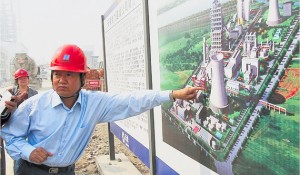 China in 2010 became the world’s largest investor in clean energy. It is the largest producer of solar panels and of wind energy. Here, an engineer points to a diagram of the GreenGen coal-fired, low-emission power plant that went online this year.

This year, possibly for the first time ever, the United Mine Workers did not endorse a presidential candidate. In 2008, the union was an early endorser of Obama, and has usually supported Democratic candidates. The union’s decision to sit it out this year was an indication of the crisis that has befallen coal miners, who don’t know where to turn for help.

In 1923, there were 700,000 coal miners in the United States. Today, there are fewer than 88,000. In this same period, the total amount of coal produced here annually has doubled, while productivity per worker has increased about 14 times.

Mining coal is a hard, dirty and dangerous job. Most of the mines are in areas, like Appalachia, where poverty is high and other types of work are hard to get. Historically, coal miners have been among the most class-conscious and militant workers. Their harsh conditions and the high-handed, brutal tactics of the mine owners resulted in class struggles that have at times amounted to open warfare.

Both capitalist parties want the votes of miners and their communities but have no answers to their rising problems. The Republicans tried to make hay this year by blaming growing unemployment in mining areas on government regulation of coal mining and coal-fired power plants, which are major producers of greenhouse gas (GG) pollution. Romney even found some coal miners willing to stand on the platform at one of his campaign rallies. The Republicans failed to capture the union’s endorsement, but the workers were disappointed enough with the Obama administration to withhold their support.

No mention of climate change in debates

Capitalist politics is based upon deception of the masses of people. This election was no exception. While the presidential debates were about the budget deficit and taxes, the all-important issues of jobs, poverty and climate change got little attention from the candidates. Climate change in particular was never even mentioned.

It should have been a perfect opportunity to bring to hundreds of millions of viewers a clear, scientific explanation of what is happening to the world’s environment because of rampant, profit-driven industrial expansion, and then present a program of what to do about it.

Here, in the richest of all capitalist countries, the technology and the human power exist to remake the entire infrastructure and begin to turn around the intensifying cycle of unnatural disasters now unfolding.

The energy of every person who needs and wants a job and training could be employed in such an endeavor.

Of course, nothing of the kind happened. The absolute lack of any plan, even to deal with the after-effects of hurricanes, tornadoes, droughts and floods, let alone with their causes, was made painfully clear during and immediately after the election. Millions had their lives turned upside down by climate-change-induced catastrophes all over the country, from wildfires in the West and drought in the Midwest grain belt to the swath of submerged and hammered communities hit by Hurricane Sandy, which rampaged from the New York-New Jersey coast all the way to the Great Lakes and into Canada.

Yet the recent annual U.N. talks on climate change, which took place this year in Doha, the capital of oil-rich Qatar, got nowhere as usual.

The governments of the rich and powerful capitalist countries that have produced the vast majority of carbon dioxide gas that today blankets the earth, trapping its heat, have blocked any efforts to set quotas for reducing the emission of greenhouse gases. Nor could the small island countries that face extinction as sea levels rise get any meaningful help for their people.

However, the lack of an international agreement hasn’t stopped every country from moving ahead with tackling this urgent problem. Most notable is the People’s Republic of China. It is worth citing a few facts about what China is doing, especially since most of the U.S. media present China as a major problem in climate change.

China relies on coal for 70 percent of its energy. It has the largest coal deposits in the world, and is presently the largest consumer of coal. This is a huge problem for China, and has contributed to serious air pollution in most of its cities.

But in 2010 China became the world’s largest investor in clean energy. When the 2008 financial crisis hit, the U.S. spent trillions on bailing out the banks and other financial institutions. China, seeing its export market drying up as the Western capitalist economies plunged, did something different. It invested nearly a trillion dollars in its infrastructure, much of it dealing with the problem of energy conservation as well as clean energy generation.

It established the Thermal Power Research Institute, the Clean Energy Research Institute and many other government bodies to integrate scientific breakthroughs with industrial development. This led to vastly expanding its investment in renewables like solar panels and wind farms.

In October the China Institute of Atomic Energy announced it had completed the construction of an experimental fourth-generation fast neutron reactor that is now contributing 20 megawatts to the power grid. The plant utilizes 60 percent of the energy in its uranium fuel, compared to just 1 percent for older pressurized water reactors. The next step in China’s nuclear program is a fast reactor that uses recycled fuel — thus beginning to draw down the huge piles of radioactive waste accumulating around the world.

China’s investment in cleaner energy has also led to the development of new ways to use coal without adding carbon dioxide to the atmosphere.

This year, a coal-fired plant called GreenGen went online in Tianjin that is generating 400 megawatts of electricity with near-zero emissions of carbon and sulfur. The carbon is sequestered and pumped back deep underground. GreenGen is a pilot plant; if it performs as expected, China will build more and phase out the older polluting plants.

Coal is not the answer for all time, obviously. Coal, like oil and gas, is a fossil fuel. It was created by geological processes over millions of years, and it is being depleted at an alarming rate by human extraction. It is not renewable.

Over the short term, however, the new coal-fired energy technology can help China reduce its GG emissions — which it committed itself to do at the U.N. conference in Copenhagen three years ago. It voluntarily set itself a target of a 45 percent reduction in GG emissions per unit of economic development by 2020. (Bloomberg News, April 3)

China is still a developing country, one that has to feed and house 1.3 billion people — four times the population of the U.S. How can it afford to be on the cutting edge of dealing with global warming, when only two generations ago most of its people lived in dire poverty?

The answer is that, despite the growth of the capitalist market in China, its central financial and industrial institutions are still publicly owned and operated according to a planned economy made possible by its socialist revolution of 1949. Even Western capitalists, who would love to break up state control over the Chinese economy as they did in the former USSR, recognize this.

The U.S. Public Broadcasting System aired a documentary last April entitled “Earth, the Operator’s Manual.” It can be viewed online. Among the people interviewed on this program, which deals with the question of climate change, is Jon Hofmeister, the head of Shell USA.

Hofmeister says about China: “There is literally a plan in their energy policies. It’s good to have a plan — having that long arc of commitment. … We’re not making the decisions at the national level that need to be made in terms of the next decade and the next several decades after that. … Places like China have a clear plan, and they are driving forward and they are building an energy infrastructure for the 21st century which will perhaps supply energy to the world’s largest economy — China, not the U.S.”

How ironic that a major capitalist — from the oil industry, no less — should speak admiringly of China’s economic plan. Of course, Hofmeister would be horrified if we were to suggest that Shell, Mobil, General Electric, Ford, Citibank and all the huge corporations and banks that have a lock on the U.S. economy should be taken over through a workers’ revolution so that the riches of this society, built by the workers, could be organized in a rational plan and used to meet people’s needs, not the profit greed of a small class of parasitic owners.

No, Hofmeister wants to have his cake and eat it, too. He wants the capitalist government to invest the workers’ money into just enough planning of infrastructure so that his company won’t fall behind China and can still produce enormous profits for his class.

One of the U.S. companies that has started doing business in China is Peabody Coal. It actually divested its mines in Appalachia by selling them to a company created for this purpose, which then conveniently went bankrupt. This pushed the responsibility for the miners’ pensions and health coverage onto the government — a common trick nowadays.

Peabody is involved in the GreenGem plant, and would probably like to take the technological knowhow that China has developed in the field of near-zero-emission, coal-fired energy generation and make profits from it here in the U.S. But Peabody wouldn’t sink much of its own money into such a plan. It would agree with Hofmeister that the government should pay the lion’s share. The primary concern of Peabody, as a capitalist corporation, is not clean energy. It is profit.

The U.S. capitalist government, however, is already so overburdened with paying the banks their interest on the national “debt,” spending trillions on protecting the worldwide imperialist interests of big capital, and also repressing the working class at home — where we have the largest prison population in the world — that it is trying to figure out what to cut, not what to add.

Mattoon power plant, dead before it was born

Actually, there was a plan to build such a low-emissions coal-fired power plant in the U.S., beginning back in 2004 with the founding of the FutureGen Alliance. Millions of dollars were sunk into it before the Bush administration withdrew funding. After the bubble burst, the new Obama administration said in 2009 that some of the stimulus money should go into building the FutureGen plant in Mattoon, Ill. But it seems that the plug has been pulled on that plant, and it is now going nowhere.

The capitalist system has no answers to the problem of global warming or to the despair of the coal miners, who are being replaced not by environmental regulations but by new technology like mountaintop removal.

Meanwhile, many communities ravaged by Hurricane Sandy are still suffering. And the Midwest drought has lowered the Missouri and Mississippi rivers by as much as 20 feet, threatening to halt shipping there. (Thanks to WW subscriber Joe Johnson of Wisconsin for this information.)

The profit motive, which is so totally entrenched in this capitalist society, stands in the way of a rational reorganization of the economy that would provide jobs for all while re-greening the planet. Only the working class and the oppressed, fighting in their own interests, have the power to bring this ruling class down and put production on a sustainable basis. Environmentalists have a duty to do all they can to help make this happen.