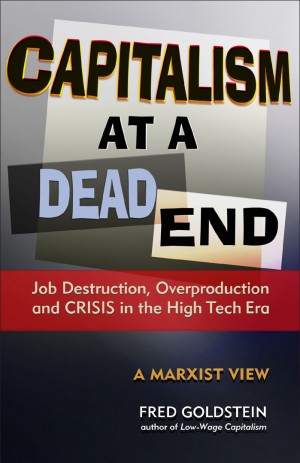 “Capitalism at a Dead End” is the expressive title of a book published this year in the United States that analyzes the current crisis of world capitalism from a Marxist point of view. Focused mainly on the U.S. situation, the book shows the significance of job destruction and overproduction in an era of high technology and high labor productivity. It’s a work that, starting from current conditions, covers not only the economic crisis but also the social and political movements that it is generating.

The author, a North American named Fred Goldstein, writes for Workers World newspaper and in 2008 published another work, “Low-Wage Capitalism,” in which he describes the effects of the new globalized imperialism and high technology on the class struggle in the USA.

The explanation made in “Capitalism at a Dead End,” to which this review is dedicated, focuses on three or four facts critical to understanding the current crisis, but discussed hardly at all within the prevailing currents of opinion. They are, in our view, the following:

• This is a long-term crisis, we are still in its early stages and its character is not at all comparable to the normal highs and lows of economic activity.

• At its root is a fall in the rate of capital accumulation, which makes the finan­cial aspects a consequence and not a cause of the present problems.

• Where one can speak of any economic recovery after the collapse of 2008 (as in the U.S.), this recovery has taken place without a recuperation of jobs, which had been eliminated in unprecedented numbers.

Hence, the entire capitalist system is at a dead end. Or, as the author says, “Capitalism reached a point where, on its own, nothing of an economic character could by itself get the system moving forward and upward any longer.”

Starting from these findings, and making comparisons with major world crises of 1873-96 and 1929-39 — from which capitalism emerged under the impetus of war (Spanish-American War of 1898, World Wars of 1914-18 and 1939-45), embarking upon imperialist expansion — the author writes that global capitalism’s response to its crisis today also points to the “massive destruction of means of production and infrastructure.”

With the cataclysms that occurred since 2008, the panorama of class struggle has also changed. The tendency to profit at ever lower rates, the inability to bring up employment levels, even partially, translate to a general decline in wages (a “low-wage capitalism”). And so, in the words of Fred Goldstein, “The era of concessions has been replaced by the era of givebacks” — as is evident, we note, on this side of the Atlantic, not only in the reduction of wages but also in cuts in social benefits and greater job insecurity, and in the attack on labor and union rights. Everything, in short, that in postwar Europe and in Portugal after April 25 [the 1974 anti-fascist revolution] was presented as a supposedly irreversible “advance for civilization.”

This crisis shows that it is different, Goldstein emphasizes, for another reason. “All the traditional methods by which the system has been revived [in previous situations] are being used but no longer work.” The proof is in the trillions of dollars (and Euros) injected mainly into the financial system with the sole effect of avoiding a worsening of the crisis, but without signs of an economic recovery.

More: the fact that U.S. business is grow­ing at a snail’s pace and that Europe and ­Japan are on the verge of decline is increasing fears, even within the corridors of ­power, of a new global economic downturn.

But if this is a crisis of global extension that is not just a cyclical downturn of business and there is no real recovery in sight, then we believe it takes on the character of the end of an epoch.

As the author asserts, “The profit system is entering a stage at which it can only drag humanity backwards.” So, “The masses of people will come to a point where they cannot go on in the old way because capitalism is blocking all roads for survival.” And having reached this point, “humanity can only move forward by clearing the road to survival, which means nothing less than the destruction of capitalism itself.”

The theses of the book by Fred Goldstein, lead us, in effect, to an issue to which the Marxists and the Communist movement will have to pay close attention: with this crisis the era of capitalist expansion that began after the Second World War has ended and consequently it is creating the conditions for a new cycle of worldwide social revolutions.

In our opinion, the words of Karl Marx as he was evaluating the economic crisis of 1847 must therefore be considered extremely topical. Reflecting on the recovery of capitalism in the years 1848 and 1849, once the revolutions that occurred in Europe in 1848 were defeated, he said:

And Marx concluded: “A new revolution is possible only as the result of a new crisis. It is inevitable as is the latter.”

The crisis we are living through now, is it not, after all, evidence of conflict between the modern forces of production and the bourgeois relations of production?

Raposo is a contributor to the Portuguese website Mudar de Vida (www.jornalmudardevida.net). John Catalinotto translated from the original.