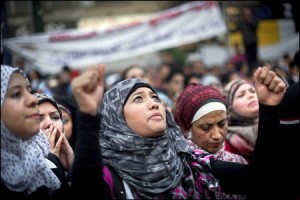 Egyptians demonstrate against President Morsi demanding that he withdraw decrees that usurp powers from the judiciary.

Egyptians in 10 of the country’s 27 provinces, including the two major cities of Cairo and Alexandria, voted on Dec. 15 in the first phase of a referendum for a draft constitution. The follow-up vote is scheduled to be held Dec. 22 in smaller cities and rural areas throughout this North African state.

Only one-third of the 26 million people eligible in the 10 provinces actually voted. Preliminary results showed that the “yes” vote for the constitution received about 56 percent and the “no” vote 44 percent. The new constitution and other issues have drawn widespread protest throughout the country over the last month.

On Nov. 22, President Mohamed Morsi of the Muslim Brotherhood-allied Freedom and Justice Party had issued a decree concentrating greater powers in his office. Under pressure from mass demonstrations, Morsi rescinded this decree a few weeks later.

These two developments, the decree and the national referendum, led to the formation of a large opposition coalition calling itself the National Salvation Front. It consists of left, liberal and nationalist parties and organizations in opposition to the character of the constitution and the political process which the FJP government has utilized in the recent period. While there are some prominent pro-capitalist leaders like Mohamed ElBaradei in the NSF, there are also new organizations of youth who were the backbone of the revolutionary movement two years ago.

Official preliminary results show the “no” vote won in both Cairo and Alexandria, meaning that the two main political centers rejected the FJP leadership. Nevertheless, the FJP, along with the Al Nour ­Party, a Salafist-oriented organization, have ­declared victory for the draft ­constitution.

The National Salvation Front has rejected the official results and is calling for canceling the second phase of the controversial process on Dec. 22. The NSF cites lack of judicial supervision and vote rigging, and demands that the government abandon the process and re-open negotiations on a new constitution.

The NSF called upon its supporters to go into the streets on Dec. 18 to express their opposition to the character of the elections. Some of the violations cited by the coalition were unstamped voting ballots (making them invalid), the names of dead people on voter rolls, the absence of judicial oversight, and the presence of what they claim were 120 “fake” judges involved in the monitoring process.

These elections take place in a period of economic decline. Unemployment remains high, and the domestic sectors of tourism and natural gas have been depressed.

The FJP government of President Morsi has taken no measures that would distance it from the international capitalist financial institutions. Nor has it reoriented Egyptian foreign policy away from the U.S., taken a position against the state of Israel, or shown more solidarity toward the Palestinians in Gaza than did the pro-U.S. Hosni Mubarak regime.

Qatar, a Gulf emirate allied with the U.S., has recently pledged $20 billion in investments to the Morsi government.

The Egyptian masses overthrew Mubarak because they wanted fundamental change in how Egypt was run, including overturning the political, economic and foreign policy of the pro-imperialist government, along with more of their own participation in that rule. They are unhappy with the successors to Mubarak and are again opening the door to change. This will require a break with imperialism and rebuilding the country based upon its own national interests and those of the majority of the population.