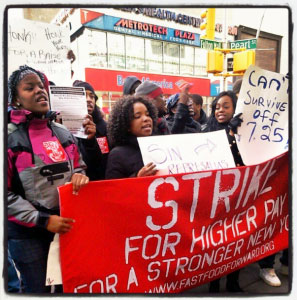 Revolutionary thinkers wrote centuries ago that sometimes decades can go by and nothing of note happens in the class struggle. Then, they observed, a decade of developments can occur in just a blink of an eye.

That is exactly what happened in the U.S. as over 200 fast food workers went out on strike in New York City on Nov. 29. What made it even more significant is that these walkouts followed hundreds of “Black Friday” Walmart actions nationwide, along with major work stoppages at Los Angeles Airport and California ports.

It was, indeed, an extraordinary week of class struggle in the U.S.

The Nov. 29 walkout and union drive in NYC took place in industries that were considered next to impossible to organize. But megacorporation McDonald’s, as well as Taco Bell and Wendy’s, were some of the fast food chains that experienced walkouts, which can only be described as unprecedented and historic.

In fact the New York Times wrote that it was the “biggest effort to unionize fast-food workers ever undertaken in the United States.” (Nov. 29)

The effort was organized by a coalition of community organizations with union support, including NY Communities for Change, Service Employees UNITE NY as well as The Black Institute.

Hundreds of workers and their supporters gathered at Times Square at 6 a.m. Nov. 29 to demand better wages and conditions. The Fast Food Forward website, one of the coalition members, posted the main chant of the workers: “We can’t survive on $7.25!”

The website describes conditions behind the campaign: “… people who work hard should be able to afford basic necessities like groceries, rent, childcare and transportation. While fast food corporations reap the benefits of record profits, workers are barely getting by — many are forced to be on public assistance despite having a job.”

Community support by labor, Occupy Wall Street and progressive activists played a key role in the campaign. In fact, when Wendy’s tried to fire one of the strikers in a Brooklyn restaurant, a community delegation showed up right away. Supporters included New York Councilmember Jumaane Williams, who urged customers to either leave the restaurant or not come in at all in support of the striker. The tactic worked; the worker was rehired on the spot as some of the customers left the restaurant in solidarity.

This shows the strength of people power.

The New York Times, in a Nov. 20 article titled “Skills don’t pay the bills,” published an illuminating graphic with a picture of two employers, one represented by a manufacturing building and the other a McDonalds.

Lines went around the corner of workers applying for jobs, not at the manufacturing factory but at the food factory. The article stated, “Nearly six million factory jobs … have disappeared since 2000. And while many of these jobs were lost to competition with low-wage countries, even more vanished because of computer-driven machinery that can do the work of 10 or, in some cases, 100 workers.”

The article went on to say, “Hundreds of thousands of U.S. factories are starving for skilled workers.” It referred to a study claiming that nearly 80 percent of manufacturers have jobs they can’t fill. The National Association of Manufacturers estimates there are “roughly 600,000 jobs available for whoever has the right set of advanced skills.”

Why are these jobs hard to fill? The CEO of GenMet, a Milwaukee metal-fabricating manufacturer, explained it best. He said he would hire as many skilled workers as showed up at his door. Last year, he received 1,051 applications and found only 25 people who were qualified. He hired all of them, but supposedly soon had to fire 15. Part of his “pickiness,” he says, comes from avoiding workers with experience in a “union-type job.”

Indeed the starting pay is only $10 an hour. Those with an associate degree can make $15, which can rise to $18 after several years of good performance. Yet, the Times writes, a new shift manager at a McDonald’s can earn around $14 an hour.

It must be pointed out that while they “can” earn $14 an hour, the workers who walked out on Nov. 29 show that most don’t.

The National Employment Law Project reports that nearly 60 percent of the jobs added since the recession have been these types of low-wage jobs, particularly in retail sales and food preparation. Conditions at these corporations are shameless, especially when you consider their profits.

McDonald’s net income in the third quarter was a whopping $1.46 billion! Total sales at McDonald’s were a staggering $7.15 billion in one year. (NY Times, Oct. 19)

Walmart slipped to number two in this year’s Fortune 500 after holding on to number one for two years in a row. Their profits declined to an astounding $15.7 billion!

No wonder Walmart and McDonald’s workers are walking out. The profits the workers have made for these corporations is astounding, yet the workers still have to apply for food stamps. If ever there was a case to expose the contradictions of capitalism, this is THE one.

This upsurge in the class struggle is taking few by surprise.

That the specter of union organizing is haunting megaconglomerates like McDonald’s and Walmart was inevitable. The capitalist system’s drive to move industry toward more high technology with miserable low pay for the workers; its voracious drive for ever more profits; the fact that war no longer provides the economic panacea it used to; technology and automation are creating downward pressure on wages; and an expanding worldwide work force far outnumbers the shrinking pool of jobs — all these factors have created the conditions that led to these walkouts.

Capitalism, at a dead end, with fewer and fewer world markets in which to sell commodities, is providing no way out for the working class.

In fact, this dying animal is increasing its attacks tenfold.

It was inevitable that the work force that created the wealth for the capitalist 1% would sooner or later rise up against these conditions. The specter of organizing, of fighting back against the megacorporations that compose the capitalist system is in its infancy, but it is getting brighter. It remains to be seen where this will go.

This specter also brilliantly illuminates that the conditions of exploitation between the bosses and the workers are irreconcilable. Sooner or later, somewhere the class struggle will burst asunder.

This is a time to seize the moment. Class-conscious fighters and progressives of all types should be on the front lines to express their unconditional solidarity with low-wage workers and help them win. A union victory at Walmart or McDonald’s would be a huge tipping point for the class struggle.

Then the next step would be to abolish the capitalist system altogether. Only that will assure a real victory for the workers and the oppressed here and around the world.