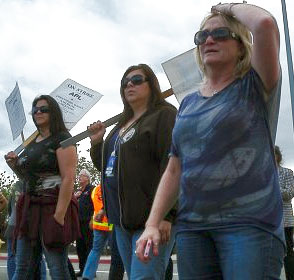 Dec. 2 — After more than two years without a contract, 800 office and clerical workers, employed by international carriers at the ports of Los Angeles and Long Beach, went on strike on Nov. 27.

According to the International Longshore and Warehouse Union press release, “Over 51 permanent positions that benefit the Harbor community have been lost in recent years because of outsourcing to diverse locations including Costa Rica and Dallas, Texas. The companies have been reluctant to admit their outsourcing strategy, but workers have obtained documents and other information that confirm the practice.”

More commentary on the strike was posted on the ILWU.org website: “We’ve been meeting with the companies for more than two years, but they’re still concealing their outsourcing — even when they’ve been caught red-handed,” said Local 63 Office Clerical Unit President John Fageaux. “These employers seem to have an insatiable appetite for outsourcing,” he said, noting … that the companies have announced plans to take away another 76 [jobs] in the future.”

Seven of eight terminals in Los Angeles and three of six in Long Beach were closed to cargo container traffic as longshore workers refused to cross picket lines set up by the ILWU clerical workers. The strike, in its sixth day, continues as of this writing.

In an ILWU Coast Longshore Division News release: “The ILWU-PMA Coast Labor Relations Committee that establishes policy and administers the contract between the employer and union on the West Coast waterfront on Wednesday [Nov. 27] agreed that ILWU Local 63 Office Clerical Unit (OCU) picket lines at the Ports of Los Angeles and Long Beach were bona fide. The agreement confirms that longshoremen in ILWU Locals 13, 63 and 94 have the right to refuse to cross OCU pickets under the collective bargaining agreement between the International Longshore and Warehouse Union and the Pacific Maritime Association.”

Los Angeles and Long Beach handle 40 percent of the nation’s import trade. About a quarter of a billion dollars in goods travel through the three terminals every day. “Thanks to computer technology, shippers can easily push buttons and maybe even get tax breaks by moving work to other regions,” ILWU spokesperson Craig Merrilees said. (AP, Nov. 28)

As of Dec. 2, at least 18 cargo ships had been unable to load or unload since workers began the strike Nov. 27. A handful of vessels that were anchored offshore apparently left for other ports. One of these ships, the APL Iolite, went to the Port of Oakland to unload its cargo.

A van full of the L.A. strikers drove up to Oakland to set up a picket line. Ostensibly because of heavy rain, but more likely to discourage a potential picket line, the vessel initially dropped anchor in the middle of the bay, instead of tying up at the port. Once the strikers left for home, the ship was brought in and unloaded by ILWU longshore workers. If there had been a picket line, they would have been able to refuse to work.

Meanwhile, negotiations, which were resumed after a day-long port shutdown at the Port of Oakland by clerical, electrical and maintenance workers in Service Employees Local 1021, have resulted in a tentative settlement. The settlement will be brought to union members for a vote on Dec. 5.