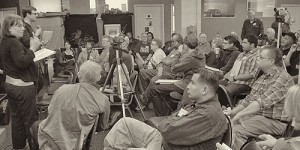 New York — Revolutionary communists and activists filled the hall of a beautiful Indigenous community center in Manhattan Nov. 17-18 for the annual national conference of Workers World Party. The theme of this year’s two-day gathering was “Beyond the 2012 Elections: How to Get Back to the Struggle vs. the 1%.”

Several hundred party members, friends and allies traveled to this city from the West Coast, the South, New England and everywhere in between for the conference. Hundreds more observed the conference via live stream. At least a third of the participants were under 35 years old, helping to fill the conference with revolutionary energy and optimism. WWP Secretariat members Sara Flounders, Fred Goldstein, Deirdre Griswold, Teresa Gutierrez, Larry Holmes and Monica Moorehead spoke on various panels.

The opening plenary session set the overall political tone for the conference, with a major focus on the worldwide capitalist economic crisis and the need for global struggle and solidarity. Gutierrez, an organizer with the May 1 Coalition for Worker and Immigrant Rights, and Larry Hales, a WW contributing editor, both gave motivational remarks on why People’s Power Assemblies are important and timely to challenge capitalist rule. Goldstein, author of “Capitalism at a Dead End,” spoke on the relationship between Marxist theory and practice. Holmes, WWP First Secretary and International Action Center co-director, spoke about the need to take the class struggle to a higher political level, including developing a global fightback perspective.

Eva Panjwani, a new member of the Durham, N.C., WWP branch and an organizer of the Sept. 1 March on Wall Street South (MOWSS), gave a moving welcome address. Tova Klein, from the San Francisco branch, chaired and read a WWP statement in solidarity with the people of Gaza who are resisting the latest round of Israeli terrorist bombing. Klein, who is Jewish, was born in occupied Palestine.

Issues raised in the plenary included struggles against police brutality and racist repression; Walmart and low wages; student tuition hikes and debt; resegregation as well as the significance of the Chicago teachers’ strike; and the need for a shorter work week. Cathey Stanley, from the Durham branch, chaired and read a statement from long-time WWP member and “Stone Butch Blues” author Leslie Feinberg, which included solidarity with CeCe McDonald, an imprisoned African-American transwoman.

A resolution was passed by the conference affirming to continue the struggle for freedom of all U.S. political prisoners, including Mumia Abu-Jamal, Leonard Peltier, the Cuban Five and Lynne Stewart.

Need for a fighting party

The theme of the fourth plenary was “Workers World across the Decades: Intergenerational Stories on What It Means to Be a Revolutionary.” This panel featured four members of the WWP youth fraction: Dinae Anderson from New York, Tachae Davis from Detroit, Andy Koch from Durham and Summer Smith from Salt Lake City. Other speakers were John Parker, a leader of the Los Angeles WWP branch and West Coast coordinator of the IAC, and Monica Moorehead, a WW managing editor and editor of “Marxism, Reparations and the Black Freedom Struggle.” The speakers summarized their unique paths to joining WWP.

The final plenary session was chaired by Julie Fry, a member of the New York Educational Committee. Featured talks were given by Detroit branch member Jerry Goldberg on party building and a summation by Larry Holmes. “This conference was mainly organized by young people. They basically told us when we were speaking,” Holmes stated. The conference ended with the singing of the “International” in English and Spanish and chants.

The conference included three workshops: one for youth activists, an introductory guide to Marxism and revolutionary potential in communications and information. Organized by the WWP youth fraction, break-out groups around the theme “Fightbacks and Building People’s Power” were held on the issues of labor and organizing against austerity; Occupy: What is it now and where will it go from here; repression and brutality: vigilantism, detentions, police murders; and anti-war and international solidarity.

Two open-mike sessions included a solidarity message from Mick Kelly, of the Freedom Road Socialist Organization, whose members have been targeted by FBI repression; and René Imperato, activist in the WWP Committee for People with Disabilities. Cultural presentations were performed by Cameron Aviles from the Durham branch and Steve Gillis, Steve Kirschbaum and Frank Neisser from the Boston branch.

Following the conference, many of the participants joined their Palestinian sisters and brothers at a Times Square protest against the U.S.-backed Israeli bombing of Gaza. n