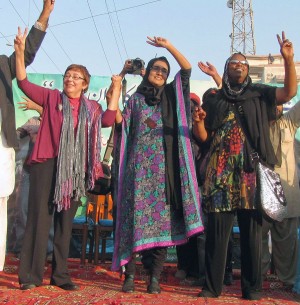 Dec. 3 — Arriving in Karachi, Pakistan, at 4 a.m. for a trip in support of efforts to free and repatriate Dr. Aafia Siddiqui, former U.S. Congressperson Cynthia McKinney and International Action Center Co-Director Sara Flounders received an overwhelmingly warm welcome on Dec. 2. Hundreds of Siddiqui’s supporters met the two at the airport in the wee hours of the morning, carrying flowers, signs and banners, and chanting “Free Aafia!” and “Welcome!”

Siddiqui is a Pakistani political prisoner who has been held in solitary confinement for years in U.S. prisons, after being abducted from Pakistan with her three young children, held in a series of secret prisons in Afghanistan, and tortured and abused. While one of Siddiqui’s three abducted children, Suleman, remains missing, the eldest of them was at the airport to greet Flounders and McKinney.

The greeting of hundreds, as well as the weeklong trip, was organized by Dr. Fowzia Siddiqui, Aafia Siddiqui’s sister, and the Free Aafia Movement.

Later that day, McKinney, Flounders and Fowzia Siddiqui participated in a “Caravan of Dignity” through the streets of Karachi, with cars, hundreds of motorbikes sporting “Free Aafia” signs and Pakistani flags, and an open-bed truck blasting songs in honor of Siddiqui. Thousands of people on foot surrounded the caravan, which proceeded to a huge outdoor rally where all three spoke in support of Siddiqui’s return to Pakistan. They were showered in rose petals along the route.

In a Dec. 2 email, Flounders writes: “Karachi is twice the size of New York City. This is Aafia’s hometown. Here the demand for her repatriation to Pakistan and her release from the torture of solitary confinement in U.S. federal prison has overwhelming support. Aafia is a heartfelt symbol of all the missing and disappeared, the victims of U.S. secret rendition programs and targeted drone assassinations.“

Flounders relates that in Karachi, this sentiment was displayed by “countless spray-painted walls and overpasses in English and Urdu with ‘Free Aafia,’ ‘Free our sister’ and the best one, ’86 years – bullshit,’ painted everywhere.” Siddiqui was sentenced to 86 years in prison by a U.S. federal judge in 2010.

After the rally, McKinney and Flounders traveled to the home of Siddiqui’s mother, Ismat Siddiqui, passing giant canvas pictures of previous rallies for Aafia Siddiqui on the streets leading to the home. Political leaders dropped by the home to speak with the U.S. visitors. Ismat Siddiqui, who sobbed for the return of her daughter, lives with Dr. Fowzia Siddiqui and her two children, as well as the two children of Aafia Siddiqui who were returned after being abducted with their mother.

The next day, McKinney and Flounders continued holding meetings and rallies to free Aafia Siddiqui. At a meeting with some 200 lawyers of Pakistan’s High Court Bar, the lawyers pledged to take legal action to force the government to act on Siddiqui’s behalf. McKinney and Flounders also met with a former Chief Supreme Court judge and all of the members of the Karachi Press Club. After a university meeting on U.S. extrajudicial assassinations and secret renditions was hastily canceled, the two women held a huge street meeting with more than 1,000 students outside the school.

Flounders says that she and McKinney have been hailed throughout the trip as “women from the U.S. supporting the return of Aafia, speaking strongly to condemn their own government for imperialist wars and the criminal U.S. role in targeted assassinations, support for the Pakistani military and the drone wars.” Over the next few years the U.S. also plans to evacuate hundreds of tons of high-tech weapons from Afghanistan from Karachi, a key port city in the U.S.’s withdrawal operation.

The movement for Aafia Siddiqui is now focused on getting every part of the political movement, and all different political officials, to publicly pledge that no one held in Pakistani custody will be released to the U.S. until she is returned. Supporters are urged to sign a petition issued by the International Action Center at iacenter.org.

In the coming days Flounders and McKinney will travel to Islamabad, the capital of Pakistan, as well as the city of Lahore and Khyber province. In addition to Workers World coverage of Siddiqui’s case and Flounders and McKinney’s trip (workers.org), more information can be found at freeaafia.org and aafiamovement.com.