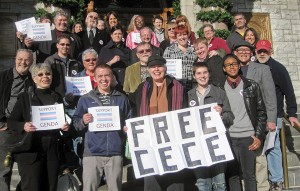 Syracuse, N.Y. — After 20-plus years of ­struggle, activists here celebrated on Nov. 19 as the Syracuse Common Council overwhelmingly passed a trans rights law. When signed by the mayor, the measure will amend the city’s existing Fair Practices Law passed in 1990 to prohibit discrimination on the basis of sexual orientation.

The new law guarantees rights regardless of a person’s “actual or perceived sex, or their gender identity or gender expression” in the areas of employment, public accommodations, housing, school, commercial space and public services.

The Council also passed a resolution urging the New York State Legislature to approve the Gender Expression Non-Discrimination Act (GENDA), which would extend similar protections on a statewide basis.

Family members of LaTeisha Green, a transwoman of color killed in Syracuse in 2008, testified for the legislation. Other individuals and groups organizing for passage included the Transgender Alliance; the Central New York State chapter of the American Civil Liberties Union; Empire State Pride Agenda; Sage Upstate, advocating for gay, lesbian, bisexual and transgender elders; a contingent of youth from the Q Center at AIDS Community Resources; and members of Planned Parenthood.

Van Robinson, president of the Council and a long-time civil rights activist, read a statement in which he remembered being denied the right to eat and drink in public spaces, being denied jobs and access to schools, and being targeted with racist epithets and threats. He noted that the transgender rights law was “a continuation of civil rights legislation enacted because of the struggles of yesteryear,” and hoped the legislation would “bring us a step closer to the dream of Martin Luther King Jr., where people are judged solely on character and not by race, creed, color, gender, transgender or sexual preference.”

After the “yes” vote, activists cheered, clapped and whistled exuberantly in the Council chambers. Then they spilled out onto the steps of City Hall for a press conference and gathered for a photograph, holding up a boldly lettered “Free CeCe” sign.

CeCe McDonald is a transwoman of ­color jailed for her act of self-defense against white supremacist and neo-Nazi attackers. A 2011 report from the National Coalition of ­Anti-Violence Programs states that violence against LGBT people is increasing, and notes that of those murdered in the previous year, 70 percent were people of color, while 44 percent were transgender women. (avp.org)

With chants and cheers, the activists drowned out a right-wing street preacher spouting brimstone threats of damnation across the street. Then, as their final act to mark Trans* Remembrance Week (Nov. 12-20), activists shouted out: “Free CeCe!” n