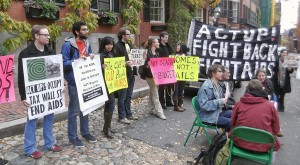 ACT UP Boston took its anti- austerity demonstration to the streets and the actual front door of U.S. Sen. John Kerry’s house in the “millionaires’ row” section of Boston’s Beacon Hill on Nov. 21.

Kerry is a Vietnam War veteran, a “dove” turned “hawk” and a multimillionaire. His spouse is heiress to the Heinz family fortune. Their joint holdings are measured in the hundreds of millions of dollars. From this privileged position, Kerry could speak out in defense of the very lives of people living with HIV and all poor and working people. Instead, he is hoping to be appointed U.S. secretary of state, an office from which he could direct U.S. occupations in the Middle East, targeted drone bombings of innocent Pakistanis and the continued fattening of defense contractors. His silence is deafening and truly equals death for millions, in the U.S. and globally.

After a 20-year absence, ACT UP Boston has returned to activism, this time with more of a global focus and a primary concern for the austerity impacts on people living with the virus. Its constituent members come from the Boston Living Center, Dorchester’s Healing Our Land, the Harvard AIDS Coalition, people living with HIV from oppressed and other communities, and many medical students from Harvard and Boston universities.