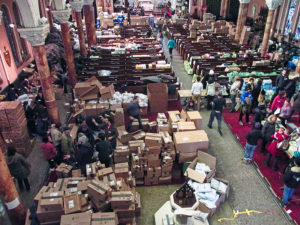 New York — Members and supporters of Workers World Party and the International Action Center helped to deliver more than a van-load of material aid that these groups had gathered to Occupy Sandy — the Occupy movement’s response to Hurricane Sandy — on Nov. 11.

It was an important experience and an important gesture of solidarity. Many activists brought in badly needed aid, including diapers, baby wipes, clothes, food, batteries and more. One WWP member organized some of her co-workers, who brought in bags full of relief items.

Occupy forces are very much engaged in efforts to support survivors of the storm. On Nov. 11, they issued a call for volunteers to help house the more than 40,000 people who are now or will soon become homeless. At the distribution site in Brooklyn activists held a consciousness-raising, anti-racist political orientation on how to present the aid to the affected communities. A young white man described how the term “looting” is a racist term that is mainly used against Black and Latino/a communities.

The distribution site was buzzing with activity. Carloads and even a small U-Haul truck of aid were contributed by many volunteers. The area was so heavy with activity that Occupy Sandy organizers had to assign traffic coordinators to make sure donations were not blocking traffic.

Thousands of people remain without heat in Sunset Park, Coney Island, the Rockaways and Staten Island. While the temperature in New York is warm during the day for this time of year — as a result of the same global warming that caused Hurricane Sandy — it is still very cold at night and will get colder in the days to come. The victims of Hurricane Sandy in the most oppressed areas had to weather a freezing northeaster snow storm on Nov. 7. Entire neighborhoods, especially some of the housing projects, have been devastated and are still without power. Many see an ominous plan to use the occasion of the hurricane to shut these projects down altogether.

It is important to continue to engage in this struggle of working and oppressed people for survival, including continuing to provide material aid. There is nothing stronger than material aid provided with a political program.

The aid gatherers are no longer taking winter clothes. They must be selective about what will meet the needs of the people. What is needed are cleaning supplies, batteries, flashlights, diapers and other such materials. For more information visit interoccupy.net/occupysandy/.