Team Solidarity, a rank-and-file organization of school bus union workers largely in the Boston area, has the perspective of uniting bus drivers, mechanics, monitors, dispatchers and other school bus union workers. By working with parent organizations, teachers, the Black Educators Alliance of Massachusetts and other educational activists, it also aims to unite with the communities that its members serve in their struggles against racist attacks on equal quality education. 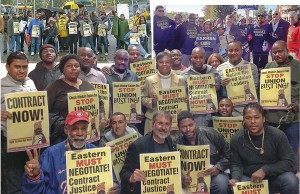 The group works to embody the motto of the 1970s militant Center for United Labor Action: “If you don’t have a union, fight to get one. If you have one, fight to make it fight!” It has weekly organizing meetings, held alternately at Boston’s Workers World office, Service Employees Local 888 hall in Somerville, and Bishop Filipe Teixeira’s Saint Francis of Assisi Church in Brockton.

According to Team Solidarity leader Georgia Scott, “In 2012, we are still fighting the same racism we fought in Selma in the 1960s. Labor must stand in solidarity in the fight to defend the Black community’s right to equal education.” Scott is a veteran USW 8751 steward and Civil Rights activist from Selma, Ala.

In this vein, important meetings hosted by the Coalition for Equal Quality Education are being held to formulate a strategy to stop the efforts of Boston Mayor Thomas Menino and the school department to resegregate Boston public schools. Similar resegregation campaigns are planned in towns throughout the state.

A Solidarity Day with the Eastern Bus drivers was held on Sept. 28 outside the Somerville bus yard. The workers have filed complaints with the National Labor Relations Board against Eastern, which include refusal to bargain, failure to deliver documents to the union for negotiations, illegal firing of two union leaders, illegal installation of surveillance cameras, illegal implementation of a new disciplinary policy, and retaliatory reductions in pay and work. The NLRB will go forward with a majority (more than 20) of the unfair labor charges.

Leaflets and posters were created and distributed for the Sept. 28 event, and outreach and organizing were conducted throughout the labor movement and the communities.

For approximately three hours, Team Solidarity and its supporters maintained a moving picket line outside the Somerville yard, chanting for the return of the fired Eastern drivers and demanding contract negotiations. At one point, the majority of those present moved onto the property to present owner Chuck Winitzer with a formal letter demanding contract negotiations and rehiring of the fired drivers. Winitzer refused to allow the Eastern drivers to enter the trailer that serves as the office. His son came outside to call the cops over.

After a nearly 30-minute standoff, one Eastern driver was allowed to enter the trailer and hand-deliver the letter to Winitzer. Winitzer’s son then followed the picketers back to the edge of the property and closed the gates, denying further entrance to the bus yard. Solidarity Day received extensive and positive media coverage from a local newspaper, The Somerville Journal.

After the extremely successful Solidarity Day, Team Solidarity returned the support it received from Vice Mayor Simmons by attending the Cambridge City Council meeting on Oct. 1. Team Solidarity packed the chambers, and a delegation of several Eastern drivers was able to speak and read aloud a letter from Rep. Michael E. Capuano.

The City Council members and mayor of Cambridge then unanimously passed a resolution proposed by Vice Mayor Simmons in favor of the Eastern drivers. In part, it says that the City Council goes on record “in urging Eastern Bus Company to obey the law and immediately convene negotiations[,] … that [Eastern] rehire any drivers that have been terminated as a consequence of their involvement in organizing their union, that the company refrain from any form of retaliation against those workers who sought to organize, and that the company treat all its workers with the respect and dignity they deserve.”

Winitzer has contacted the union requesting the commencement of negotiations. However, many drivers who have been active in union organizing have received deductions in their wages and cuts to the amount of work they receive.

In the meantime, another important violation has come to light. In a thinly veiled attempt by Eastern to evade legitimate representation by the Steelworkers in the towns of Newton and Medford, Mass., the employer has brought in a company union for the workers. Attached to their clipboards, the employees received a fraudulent contract which neither contains the input of the workers nor represents their interests.

These illegal actions set up what is called a “runaway shop.” Operations for these two towns are conducted out of the Somerville bus yard, where USW is the sole collective bargaining agent. Newton and Medford ought to be included in the bargaining unit represented by USW.

In late October, the employer fired a Medford driver for union activity. Team Solidarity has joined with the Medford and Newton workers to fight for justice for the worker.

United rank-and-file action, in conjunction with solidarity in the labor movement and the community, has once again achieved important successes in the fight for workers’ rights.