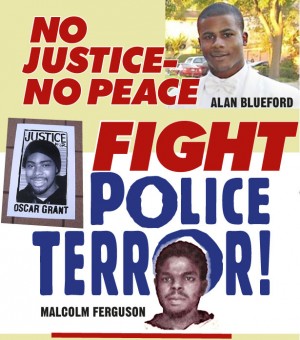 New York — “I am the proud father of Alan Blueford, murdered by the Oakland police,” stated Adam Blueford. His spouse, Jera­lynn Blueford, added, “Alan’s murder was arbitrary, unnecessary and racist.  It’s sad to say but he was shot down because of the color of his skin. They profiled him by saying he looked suspicious.”

These gut-wrenching, heartfelt words were spoken at a powerful, moving public forum held here Oct. 27 on “Fight All Police Terror: Solidarity with the Victims and their Families,” sponsored by Workers World Party.

The Bluefords had traveled from Oakland, Calif., to speak at forums in New York and Philadelphia on behalf of their 18-year-old beloved son, Alan Blueford, who was fatally shot on May 6 by police officer Miguel Masso. The parents are leaders of the Justice for Alan Blueford Campaign in the Bay Area. The campaign has held numerous demonstrations, including disruptions of Oakland City Council hearings.

Adam Blueford gave a brief scenario of the events leading up to his son’s death on May 6. Alan and two friends, who had earlier been at a Cinco de Mayo party and then watched a boxing match, were confronted by cops after midnight. When Alan ran from them out of fear, he was run down by Masso. The officer shot him three times in the chest as he was lying on the ground. Witnesses heard Alan say before he was shot, “I didn’t do anything.” After being shot, he asked Masso, “Why did you shoot me?” before they let him bleed to death. Adam Blueford described Masso as a rogue cop with a known history of police abuse when he was a member of the New York Police Department and in Oakland.  Masso was also a member of the military police in Iraq.

Jeralynn Blueford, with tears flowing and righteous anger in her voice, provided many facts about her son’s death. Among them was that his parents were not allowed to see the police report for six months and the coroner’s report for five months. The district attorney’s office recently announced it would not bring any charges against Masso for Blueford’s death.

The police interviewed 39 witnesses in the Blueford case but used only one statement — the one favorable to Masso’s claim. The police refused to meet with Alan’s parents when they went to the police station to try to get more information about their son’s death. After sitting there for two to three hours, they gave up and left.

Alan bled to death for lack of medical treatment, but Masso got immediate treatment for a gunshot wound in his foot.

The media reported that Alan was in a shootout with the police. However, no gunpowder residue was found on his hands, and it turned out that Masso’s wound was self-inflicted. The media have not retracted their story.

Jeralynn Blueford stated, “This is a very traumatic thing that has happened to my family.  It inspires me to fight.  I am angry and outraged.  I will never get over this.  Our lives have been shattered.  I never got the opportunity to hold my son’s hand. That Masso was a rogue cop; that he [was in] Afghanistan or Iraq and doesn’t care about life and can blow up people and not answer to anyone there — but he is going to answer here.”

The International Longshore Workers Union Local 10 has passed a resolution calling on its members to support and attend the Bay Area Families March Against Police ­Brutality, initiated by the Justice for Alan Blueford Campaign, to take place on Nov. 10 at 12 noon, starting at 14th and Broadway in downtown Oakland. The resolution also called for the arrest of Masso on the charge of murder of Alan Blueford. Read the resolution at workers.org.

Juanita Young, the mother of 23-year-old Malcolm Ferguson, who was killed by New York police on March 1, 2000, also made comments at the forum. With Jeralynn Blueford at her side, Young, an activist with the Oct. 22 Coalition to Stop Police Brutality, spoke of the pain she still feels at the loss of her son.  Holding a photo of Malcolm, she said, “It isn’t fair that because the police get the protection, we have to suffer.”

Jack Bryson gave a blow-by-blow account of events leading to the killing of 22-year-old Oscar Grant by a Bay Area Rapid Transit cop early on New Year’s Day of 2009. Bryson’s two sons were eyewitnesses to the shooting, which was captured on several digital videos and led to a rebellion in the Oakland community.

Bryson talked about how BART police had harassed and abused several youth in the Oakland station, threatening them with tasers. Grant was singled out while capturing the harassment of these youth, including one of Bryson’s sons, on video. BART cop Johannes Mehserle forced Grant, who was unarmed, to lie face down on the floor of the station and then shot him in the back. Grant bled to death, similar to Alan Blueford.

Bryson compared the trial of Mehserle with the unjust trial of political prisoner Mumia Abu-Jamal.  He stated that potential African-American jurors were summarily excluded from the jury because they testified to having been racially profiled by police. On the other hand, whites in the jury pool who expressed favorable views about the police were accepted on the jury.

Bryson also talked about the unjust change in venue of the Mehserle trial from the predominantly Black city of Oakland to Los Angeles. Mehserle received a manslaughter conviction, resulting in an 11-month sentence — a mere slap on the wrist.

Still overcome with emotion, Bryson stated whyhe became an activist: “It was a responsibility to my sons, to Oscar Grant’s family and to the community to get involved in activism and make it happen.  I didn’t want to do it, but I had no choice but to do it to protect my sons, other young men and the community. The Alan Blueford case is like Oscar Grant without the video.”  Bryson is an activist with the Justice for Alan Blueford Campaign and Occupy Oakland.

Mississippian Jaribu Hill gave a stirring talk on how the capitalist system is to blame for racist oppression. She likened the killings of Alan Blueford and Trayvon Martin to the 1955 brutal lynching of 14-year-old Emmett Till in Money, Miss., by the Ku Klux Klan.  Till’s killers were acquitted.  Hill went on to say, “These killings take place unabated without prosecution, without punishment that fits the crime.

Hill concluded: “The capitalist system is corrupt. It can’t be bandaged, can’t be fixed. Can’t work. The system is not only broken but rotten to the core and must come tumbling down.  We gotta be militant!  We gotta be revolutionary!”

Larry Hales connected the killings of Alan Blueford and other youth of color to the general role the police play in capitalist society: “Their job is to maintain the status quo; to stand between you and those who own the majority of the society — the wealthy.  If you go to a strike picket line, the role of cops is to stop workers from seizing the factory. …

“The day after the elections, nothing will have changed. The same brutal conditions will still be there. People didn’t get the right to vote by pulling a lever but by fighting and dying for it.”

In motivating the need for People’s Power Assemblies, Hales stated, “We have to see the commonality in our struggles and we have to begin to fight for power.  And it might start with fighting against police brutality and for community control over the police.  It might start with the resignation of a police chief or the entire City Council. But from there it will grow to a fight for the right to schools and education; it will go from being very specific to very general because these things aren’t separate from one another. …

“The brutality that we face is not separate from degradation and austerity; it is part and parcel of something much bigger. So when we talk about PPAs, it means that we must begin to organize and in the process of organizing, we must begin to make the system itself ungovernable. We must destroy the old order and build something that is much more human on top of it.”

The writer chaired the forum. Go to youtube.com/WWPvideo to watch the entire program.